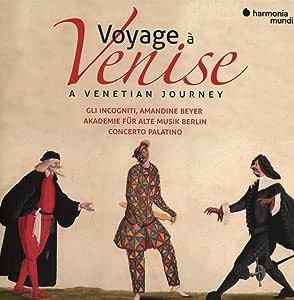 Secure transaction
Your transaction is secure
We work hard to protect your security and privacy. Our payment security system encrypts your information during transmission. We don’t share your credit card details with third-party sellers, and we don’t sell your information to others. Learn more
Details
Ships from
Amazon AU
Sold by
Amazon AU
New (8) from
$13.26 FREE Delivery on first order.

From the late Renaissance until the middle of the eighteenth century, Venice was the scene of unrivalled musical splendour, encompassing the magnificent ceremonial music heard at Saint Marks Basilica and the virtuoso music-making at the charitable institutions known as the Ospedali. This box set provides a traversal of key instrumental genres of the period when La Serenissima was a welcoming destination for musical innovators whose names are synonymous with virtuosity. An intoxicating excursion.

5.0 out of 5 stars
5 out of 5
4 global ratings
How are ratings calculated?
To calculate the overall star rating and percentage breakdown by star, we don’t use a simple average. Instead, our system considers things like how recent a review is and if the reviewer bought the item on Amazon. It also analyses reviews to verify trustworthiness.

There are 0 customer reviews and 4 customer ratings.
Back to top
Get to Know Us
Make Money with Us
Let Us Help You
And don't forget:
© 1996-2021, Amazon.com, Inc. or its affiliates