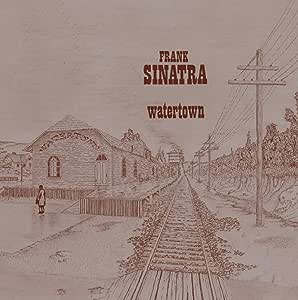 2010 reissue of his 1970 album including one bonus track, 'Lady Day'. From his days in the '40s fronting Big Bands through his enormously successful recording and acting career and right up to his early '90s duets albums, Francis Albert Sinatra was, and remains, the most beloved and respected male vocalist of the 20th Century. While Elvis and The Beatles may have defined the true spirit of Rock 'n' Roll, it was Sinatra who ushered in the era of cool. From the Rat Pack to Vegas, the East Coast to the West Coast, it's Frank's world, we're just living in it. 11 tracks. Universal.

4.6 out of 5 stars
4.6 out of 5
145 global ratings
How are ratings calculated?
To calculate the overall star rating and percentage breakdown by star, we don’t use a simple average. Instead, our system considers things like how recent a review is and if the reviewer bought the item on Amazon. It also analyses reviews to verify trustworthiness.

Runmentionable
3.0 out of 5 stars Rum and croak
Reviewed in the United Kingdom on 20 January 2020
Verified Purchase
Sinatra's last album proper before his temporary retirement in 1971 (the following "Sinatra and Company" is a mish-mash from various sessions) is a strange old thing. It's heavily flawed. The songs aren't particularly memorable, the sound quality is muddy and Sinatra's voice is on particularly poor form: he sounds old and tired, and has problems with pitching and even phrasing, which generally served him well even later into his career, when vocal issues became more and more evident. It sold badly on initial release and was pretty much the last of Sinatra's original albums to emerge on CD.

It's a concept album - the only true one in Sinatra's career. Others get that label flung at them, but they're actually collections of existing songs hung together around a loose theme - the moon, travel, feeling thoroughly miserable and enjoying every minute of it, and so on (even "Trilogy" largely falls into that category, loopy final disc notwithstanding). This is an actual Proper Sixties Concept Album - a set of songs written with the specific purpose of creating a narrative across two sides of 33 rpm vinyl. Somwhat surprisingly, the songs are written by Bob Gaudio of Four Seasons fame and Jake Holmes, who wrote "Dazed and Confused", now primarly associated with Led Zep. We're evidently some way from Burke and Van Heusen. For the most part, the songs aren't bad, but they don't really stick in the memory. The concept itself is the tale of a middle-aged man in a small town, left to raise the kids after his wife has departed for reasons never entirely made clear. Nothing much really happens except he strugges and fails to get over her.

Despite, or perhaps because of, its flaws, the album has something. The flaccid narrative, murky sound, forgettable songs and vocal problems weirdly combine to create and sustain a mood of extraordinary, confused, anxious melancholy. That Sinatra essentially sang as an actor, perfectly inhabiting whichever role the lyric suggested, is well-known. This is one of the best singer-as-actor performances of his career, and the undistinguished material actually helps with that, because you're not distracted from the whole thing by sudden snatches of brilliance. It's a slow burn, rather than a firework display, of an album, and if you're in the right mood it can be deeply moving. Sinatra really, really seems to be living the "narrator's" life.

The other things worth noting are the arrangements. The poor recording quality doesn't shine the best of lights on them, but for fans of late sixties orchestral pop, there's much to enjoy hear. Just the sound of this album takes me back to being eight, and it's an enjoyably bittersweet experience.

The albums's highlight is the closing track, "The Train", the only really memorable song here, but with it coming right at the end it doesn't disrupt the slightly intoxicated mood of sadness that carries through all the earlier chewns. "The Train" sees the narrator at the local station, hoping the incoming train is bringing his wife back to him. No spoilers, but you can probably guess what happens. "The Train" might be best appreciated on the recent Stanley/Wiggins compilation "State of the Union", where it shares space with a lot of older artists trying to deal with the social and musical changes of late sixites America, including Bing Crosby bemoaning the cost of the Apollo program. Wherever you find it, it feels like a lost classic, though it might be fair to say it's a classic which happens to have Sinatra on it rather than a Sinatra classic. Anyone who loves prime era Jimmy Webb or "Forever Changes" will love "The Train". As for the rest of the album, it's hardly peak Sinatra, but it's unique, and it has something special about it. It never comes close to the artistic accomplishments of, say, "Only The Lonely", but approach it carefully and it can feel more sincere, and more genuinely affecting, than even that berefit masterpiece. Just don't expect too much in way of catchy tunes.
Read more
3 people found this helpful
Report abuse

Jimmy Stix
5.0 out of 5 stars It's An Odd One!
Reviewed in the United Kingdom on 30 March 2015
Verified Purchase
I have been collecting Sinatra recordings for a number of years now and I came across this "odd duck" of an album fairly recently. It did not do well on it's original release and at first play you can tell why. This is Sinatra trying something new and to a 1970's listener it must have seemed strange. The kids must have dismissed him as a "has been" and his dedicated fans left to wonder what had happened to the swinging hipster, the torch song crooner, the love ballad master.
Sinatra had done so called concept albums previously, where he presented all swinging tunes or late night bar sadness; but they were not directly linked to one another. This album has an over arching story of a man coming trying to come to terms with the loss of the love his life and the mother of his children; and each song is most definitely linked.
A casual listen is not enough and it may take 2 or 3, and close attention to the lyrics and the emotion that Sinatra puts in to every line; to appreciate this underrated gem. He was always a true genius at conveying emotion and he does it here in spades. This man has been there and done that and then some. A word of warning though; you may not want to listen if you are at a low ebb emotionally yourself as the ride that Sinatra takes you on is somewhat bumpy.
In recent years I understand that more and more people are re-evaluating Watertown and recognising it for what it is. A quite remarkable, if somewhat unusual entry in the Sinatra catalogue. Strange it may be but you cannot escape the incredible quality of that voice and the phrasing and delivery that will forever remain the hallmark of Sinatra. We will never see or hear his like again.
It's worth noting that the 2010 CD release misses off the "epilogue" track "Lady Day" (as did the original LP release) so DO try and obtain a copy of the earlier 1997 release which had included the track as a bonus. It was meant to be a little postscript about what may have motivated this man's wife to leave but for whatever reason it was left off the original release.
Read more
21 people found this helpful
Report abuse

Mr. Garry Corbett
4.0 out of 5 stars 'Lost' Sinatra Album.
Reviewed in the United Kingdom on 23 November 2020
Verified Purchase
This album seems to stand alone in Sinatra's recorded output. It is not really comparable to his other work. It has the 'concept' feel of a story created by interlinking songs with a particular mood. It's falls into the sad song territory occupied by 'Sings for Only the Lonely' or 'Wee Small Hours' and could easily have become time locked and dated due to its production values and soundscape. I think it's rescued by Sinatra's acting ability in inhabiting the character of the small town man trying to come to terms with his loneliness and ordinary life. The songs deal with every day things in this character's life.
It's probably not Sinatra's best album but is certainly interesting enough to be included in any collection of the man's work. It wasn't particularly well received when released but deserves serious reappraisal. It could so easily have become his' lost album'. Recommended.
Read more
One person found this helpful
Report abuse

Sid Griffin
5.0 out of 5 stars A Frank Masterpiece
Reviewed in the United Kingdom on 8 May 2014
Verified Purchase
Though it failed at the box office while the LP before and the LP after this one sold quite well this is one of Frank Sinatra's classics if an unheralded classic. Up there with In The Wee Small Hours and Sings For Only The Lonely this is all the work of Jake Holmes (Dazed & Confused true author, take THAT Page & Plant!) and Bob Gaudio of the Four Seasons team. (I mean the Frankie Valli act, not the classical piece!)

A concept album based on a married woman leaving her small town husband and two boys for life in New York City it is beyond heartbreaking. I mean if you think you have heard sad music listen to the lyrics Sinatra is acting out/singing here and try to keep a straight stoic face. It can only be done by the dead.

No more criticism can be offered without giving the game and the plot away but suffice to say this is as classic, as killer and as emotionally fulfilling an album as Hank Williams' immortal Luke The Drifter or Billie Holiday's amazing Lady In Satin. Do NOT listen to this if you are recently divorced!! It really is that tragic. Yes, it really is...
Read more
16 people found this helpful
Report abuse

GREG
4.0 out of 5 stars UNDERRATED & AMBITIOUS RECORDING!
Reviewed in the United Kingdom on 13 July 2019
Verified Purchase
Here is Francis Albert making a great concept album with a twist... it's in the modern idiom and it's about a fictitious Family break up in a small town. IT'S wonderful and although not all the arrangements or orchestrations suit the old maestro here... he does a fine job of trying to pull it all together! As I listened to this I got the feeling that Bob Gaudio and Jake Holmes' writing and arrangements would have better suited a guy like Neil Diamond, however Frank does a fine job nonetheless!
Read more
One person found this helpful
Report abuse
See all reviews
Back to top
Get to Know Us
Make Money with Us
Let Us Help You
And don't forget:
© 1996-2021, Amazon.com, Inc. or its affiliates