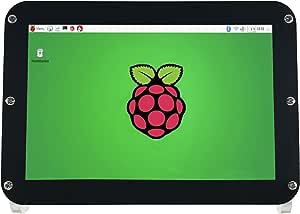 Brand: WIMAXIT
4.1 out of 5 stars 58 ratings
Secure transaction
Returns Policy
Amazon-managed Delivery
Your transaction is secure
We work hard to protect your security and privacy. Our payment security system encrypts your information during transmission. We don’t share your credit card details with third-party sellers, and we don’t sell your information to others. Learn more
Amazon-managed Delivery
Amazon manages delivery by using preferred couriers/agents. Order delivery tracking to your doorstep is available

This 8 inch IPS LCD Monitor with a high resolution of 1280*800 pixels.It is protected by a case with stand which are made of high quality black acrylic. An HDMI cable is included so you can start the screen quickly and conveniently. With the keys on the monitor back, can control the screen by pressing the keys ｨC adjust its contrast or color. It is designed with fixing holes at the back, supporting to mount Raspberry Pi 3 model B, 2 model B, 1 model B+/A+/B, etc.

4.1 out of 5 stars
4.1 out of 5
58 global ratings
How are ratings calculated?
To calculate the overall star rating and percentage breakdown by star, we don’t use a simple average. Instead, our system considers things like how recent a review is and if the reviewer bought the item on Amazon. It also analyses reviews to verify trustworthiness.

Mark Oakley
4.0 out of 5 stars Works Nicely. Uses PWM for brightness control, however.
Reviewed in Canada on 14 March 2019
Colour: 10inch HDMI MonitorVerified Purchase
This screen just arrived at my door yesterday, and I've had it set up for 24 hours.

It's exactly what I'd hoped for!

I have it mounted on a swinging arm and it serves as a "heads up display" suspended above my Dell Canvas digital drawing board. -It replaces a cute little 9" USB monitor (from DoubleSight) which I'd been using for the last several years for writing and viewing internet stuff. I decided I didn't want Death Star level tech dominating my work space all the time, and an unobtrusive little monitor allows the space to feel like it was made for humans rather than air traffic controllers.

The USB monitor was great in that it drew power from its data connection, so it had only a single cable. The downside was that it was limited to 256,000 colors and its screen resolution was only 1024 x 600. -That was fine for most things, but was too tight for using it as a primary monitor when I'd have the drawing board switched off.

This WIMAXIT monitor is an upgrade in terms of pixel density (plus an inch on the diagonal).

1920 x 1080 at 10" makes for very small fonts and icons in Windows, so I have the monitor set to 125% scale, and that is still very tight. For web browsing I find I need to increase the scale in applications a bit more as well. However, none of that was unexpected, so it's not a complaint, just an observation.

All in all, this is an excellent little monitor for my needs. The only downside being its use of PWM for brightness control. Luckily, at full brightness, (where the flicker is gone), it isn't eye-searing, though it's pushing close to the high end of tolerable. I might invest in some kind of tinting film for night time work, and will definitely make use of the Windows 10 night light red setting.

PROS:
-Crisp image, good level of brightness, good color.
-Very light.
-Has a built in mounting point on the back which allows for vertical adjustment.
-Has the cable ports inset so that they don't protrude out the side, (some of the thin 4K monitors look fantastic, but are cable nightmares if you want to mount them.)
-Competitively priced for its category

CONS:
-Uses PWM (Pulse Width Modulation) for brightness control. It flickers. You have to go into the settings and put brightness all the way up to the top in order to prevent it from flickering. Thankfully, 100% brightness is moderate and not eye-searing, though ideally it would be about 100 NITS dimmer.
-The unit is a bit on the thick side, which makes it somewhat less than modern in terms of portability. (For me that's a non-issue since I have it permanently mounted.)
-The HDMI cable is very short for my needs; I had to dig out a longer one. (For portable users, however, this might be seen as a benefit.)
-The power cable is similarly quite short and I needed to run an extra extension cord between it and my power bar.

Yoshi4444
5.0 out of 5 stars Great little true 1080p monitor.
Reviewed in the United States on 2 December 2017
Colour: 10inch HDMI MonitorVerified Purchase
I bought this to finally have a real little 1080p monitor to hook up to various PCs and devices as needed, including Raspberry Pi's, Pi Zero W, etc. I can read all the text just fine and it really is 1080p, not scaled. I bought the 4 year warranty with it because I'll be keeping this for a long time. I can't really find anything wrong with it, though it would be nice to have the stand built in. Other than that I love where the controls are, it's very light and NO dead pixels that I can find. I would suggest a case for this as I'm sure it's easy to scratch the screen. It might even be good to find a screen protector for it. They claim it's 500 nits. Maybe it is, but it is very bright. The menus are decent and there are all the options you expect. I wish it was made in the USA, but then I wish everything was. :)
Read more
9 people found this helpful
Report abuse

lutusp
5.0 out of 5 stars Terrific product, works as advertised
Reviewed in the United States on 2 March 2018
Colour: 10inch HDMI MonitorVerified Purchase
First-rate! Another reviewer expressed doubt about this monitor's resolution, but I think that review might have been about another product, not this one. This monitor really does have a native resolution of 1920x1080, as advertised, and it worked perfectly out of the box. I was able to connect it to my Raspberry Pi 3 and my Odroid XU4 (two popular tiny computers) via the provided HDMI cord, and both showed terrific-quality displays, supported the expected resolution and had HDMI sound as well.

Ricky
4.0 out of 5 stars Beautiful screen
Reviewed in the United States on 2 May 2019
Colour: 8inchVerified Purchase
I haven't done a bunch of in-depth testing of this product yet, but so far, it looks gorgeous. There are two power connectors on the motherboard of the monitor, so be sure to plug it into the one closest to the HDMI port. At first I was plugging it into the other one and wasn't getting any power. This monitor doesn't come with any manuals telling you which one is the correct one, so after almost issuing a DOA return, I finally noticed the other connector and it began working after using that one.

The color is fantastic. I am using it with my Raspberry Pi 3 B+ to display live feeds of my cameras around my house. The screen is gorgeous and I can see pictures with perfect clarity and great brightness. No dead pixels from what I can tell. I'll be permanently mounting this into my wall next to my alarm system keypad, but for the time being, sitting on a desk with the included feet work great.

The only thing I don't care for is the acrylic case. I wish it was a little more enclosed for the cost, as I can't imagine this little amount of acrylic really costing that much. But for what it is, it's perfectly fine. I think the black acrylic will look nice once I get it mounted into my wall, and it'll allow the screen to breath a bit. But outside of that, I think the screen looks gorgeous!
Read more
2 people found this helpful
Report abuse
See all reviews
Get FREE delivery with Amazon Prime
Prime members enjoy FREE Delivery and exclusive access to movies, TV shows, music, Kindle e-books, Twitch Prime, and more.
> Get Started
Back to top
Get to Know Us
Make Money with Us
Let Us Help You
And don't forget:
© 1996-2020, Amazon.com, Inc. or its affiliates