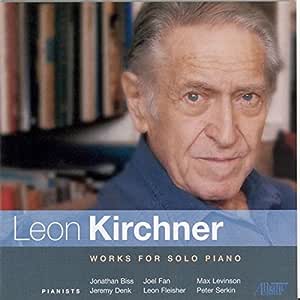 Albany is proud to present this generous selection of piano music by one of America s most important composers. Leon Kirchner is one of the last of that stalwart breed who first came to prominence in the late 1940 s and early 1950s. A pupil of Bloch, Schoenberg and Sessions at the University of California, Berkeley, Kirchner s music definitely shows affinities with Schoenberg in outlook and temperament. No less than Schoenberg, Kirchner is both an ardent modernist and a volatile Romantic, a composer whose sophisticated awareness of the past informs a restless search for authenticity. A classic example would be his Piano Concerto No. 1, first recorded over 50 years ago by the composer himself with Dmitri Mitropoulos and the New York Philharmonic. Like much of the music on this disc, there is edginess and a tough demeanor, but there is real music present, in the traditional sense. This significant new release reissues classic performances by Leon Fleisher and Peter Serkin as well as presenting important recent pieces such as the Sonata No. 2 and The Forbidden.