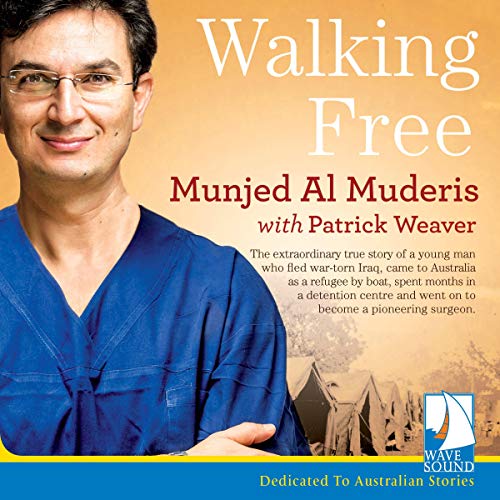 The extraordinary true story of a young man who fled war-torn Iraq, came to Australia as a refugee by boat, survived the Australian detention centre and went on to become a pioneering surgeon.

In 1999, Munjed Al Muderis was a surgical resident working in Baghdad when the military police marched into the operating theatre and ordered the team to mutilate army deserters. When the head of surgery refused, he was executed. Munjed's choices were stark - comply and breach the medical oath, refuse and face death or flee.

That day, Munjed's life changed forever. He escaped to Indonesia and boarded a boat to Australia. For 10 months he was incarcerated in what was considered Australia’s worst refugee camp, where he was known only by a number and locked in solitary confinement. In August 2000, Munjed was finally freed and went on to become one of the world’s leading figures in orthopaedic medicine, transforming the lives of amputees with a pioneering technique that allows them to walk again.

A remarkable story of courage and resilience which has become an inspirational best seller.

Read more
©2014 Munjed Al Muderis (P)2019 W. F. Howes Ltd
Previous page
Next page
Learn more about membership
By completing your purchase, you agree to Audible’s Conditions Of Use and Privacy Notice.
Sold and delivered by Audible, an Amazon company

4.5 out of 5 stars
4.5 out of 5
208 global ratings
How are ratings calculated?
To calculate the overall star rating and percentage breakdown by star, we don’t use a simple average. Instead, our system considers things like how recent a review is and if the reviewer bought the item on Amazon. It also analyses reviews to verify trustworthiness.

NicShef❤️Reading
TOP 10 REVIEWER
4.0 out of 5 stars Riveting read
Reviewed in Australia on 27 December 2015
Verified Purchase
An incredibly interesting story which should be a compulsory part of the curriculum in high schools. It is the amazing story of a cultured and privileged Iraqi man's flight from Saddam Hussein that brings to Australia as a boat person, enduring hardship and people smugglers. The harrowing part of this book for me was the graphic and horrible portrayal of Australia's detention centres; it's incredibly distressing to read that Munjed was better treated in an Australian prison than in the detention centre. It made me ashamed that Australia made it hard to begin his life here but so glad that Dr Muderis finally made his mark in the Medical world as he is making a huge difference to amputees and a leading surgeon in his field. This is well written, even if a little clinical. A riveting read especially for those who want to better understand what drives refugees.
Read more
3 people found this helpful
Helpful
Report abuse

Baldy Bob 2010
5.0 out of 5 stars Refugee in detention inhuman following a leaky boat trip to Oz
Reviewed in Australia on 28 September 2018
Verified Purchase
Excellent book. Well written. Determination to succeed and focus on what he believed he could achieve. Father instilled excellent grounding and life values in him. He is a credit to his profession and achievements. We could do with many more refugees with this mans tenacity to succeed (at the expense of his marriage(s) ).
Believing and focusing on his ability to become an orthopaedic surgeon was the driving force to becoming successful at his profession. Seeing the results of some of his work is truly inspiring ie Surgeon and the soldier plus Ahn Do's portrait.
Read more
Helpful
Report abuse

Anne Whight
4.0 out of 5 stars An astonishing story, told humbly, that offers personal insights into Munjed's life and dreams.
Reviewed in Australia on 30 April 2017
Verified Purchase
A young doctor, with a dream of becoming an orthopaedic surgeon, survives the horrors of war, people smugglers and Curtin detention to become a highly successful medical pioneer of new treatments to help amputees walk again. He became a refugee when he fled the operating theatre for refusing to mutilate army deserters, and went on the run. This is his story, but also the story of refugees seeking a new home, and the sustaining power of a person's hopes dreams.
Read more
One person found this helpful
Helpful
Report abuse

LouLosing
3.0 out of 5 stars well written, lacking emotion, hard to feel empathy, but interesting historically
Reviewed in Australia on 20 February 2016
Verified Purchase
How do you judge an autobiography without judging the person? This is a really interesting book, and has opened my eyes towards refugees. Dr Muderis led an interesting, privileged life in Iraq, but refused to surgically remove ears of people as punishment as ordered by Sadam Hussein. While this is horrific in itself, Dr Muderis does not write with emotion, rather, quite factually. The book does not reveal him as a person with feelings and opinions. He skips over his personal life leaving more questions than answers. His description of the truly awful boat crossing to Australia is written as though he was observing, but not really participating. I struggled with the sense of entitlement that he felt he had, while feeling sympathetic also that he could not have the life he wanted.
Read more
Helpful
Report abuse

k
4.0 out of 5 stars MOST INTERESTING
Reviewed in Australia on 18 April 2017
Verified Purchase
I thoroughly enjoyed this book, in that it gave me a clear, personal picture of what went on in Iraq, both during Saddam's rule, and the US/ allied invasion. One is humbled and embarrassed by the role our country has played n this debacle, especially in relation to the deplorable behaviour of staff at Cowan detention center, and the indifference shown by our elected leaders to show these people some care, support and respect. We all learn and grow as people by being exposed to such literature.
Read more
Helpful
Report abuse

Paul Gebhard
5.0 out of 5 stars An unsung hero
Reviewed in Australia on 1 June 2015
Verified Purchase
This is the personal account of the life and times of an Iraqi citizen that describes what life was like in Iraq under Saddam Hussein. The author is from a very good family and travelled widely in Iraq and several other countries, including the United States, when very young. A serious student he qualified as a medical doctor in Iraq and had to flee his country when he refused to carry out judicial amputations ordered by the Saddam regime.
He escaped to Iran and was innocently caught up in world of people smugglers who enabled him to travel to Kuala Lumpur using a fake passport. From there he travelled to Jakarta and on to an over-crowded fishing boat carrying 150 refugees to Christmas Island and on to a long and terrible detention in the North West of Western Australia.
The inhuman conditions of the Curtain Detention Centre are described in great detail and should be read by every Australian and everyone else. Inhumanity by the detention centre officials is described in detail. These places should be abolished.
After being kept for a year in dreadful conditions the author was granted a visa enabling him reside permanently in Australia where he has become a renowned surgeon who has developed osseointegration procedures that enable amputees to walk again.
One of his patients is the double amputee British soldier, Michael Swain, who invited the author, as his special guest, to Windsor Castle when the Queen invested Swain with the MBE in 2014.
Australia recently re-instituted knighthoods. Dr Munjed is a worthy candidate for this honour.
Read more
2 people found this helpful
Helpful
Report abuse
See all reviews

As an asylum seeker myself, I can’t really describe what a contribution you had made . I just wanna say thank you !

If you there !
Read more
Report abuse

S Aranki
5.0 out of 5 stars Human being should believe in other human being
Reviewed in the United Kingdom on 1 June 2021
Verified Purchase
I read it, was very interesting. One should never loose hope if have a plan in life.
Read more
One person found this helpful
Report abuse

E.A. Barstow
5.0 out of 5 stars Five Stars
Reviewed in the United Kingdom on 4 February 2016
Verified Purchase
Fantastic story and interesting to learn of the History
Read more
Report abuse

V. Walpole
5.0 out of 5 stars amazing man.
Reviewed in the United Kingdom on 4 November 2015
Verified Purchase
Fantastic reading, my daughters friend has actually had a prosthetic leg made by this man and he is amazing, she is back doing the gym and all the other things she enjoyed before losing her leg in a boating accident.
Read more
Report abuse
See all reviews