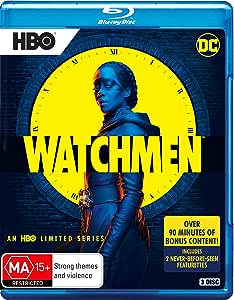 Set in an alternate history where masked vigilantes are treated as outlaws, Watchmen, from executive producer Damon Lindelof (Lost, The Leftovers) embraces the nostalgia of the original groundbreaking graphic novel of the same name, while attempting to break new ground of its own. WATCHMEN reunites Lindelof with The Leftovers’ Regina King, leading the cast as Angela Abar, who wears two masks; one as a lead detective in The Tulsa Police Force and another as wife and mother of three. The cast also includes Jeremy Irons as the aging and imperious Lord of a British Manor; Don Johnson as the Tulsa Chief of Police; Jean Smart as FBI Agent Laurie Blake; Tim Blake Nelson as Detective Looking Glass; Louis Gossett Jr. as Will Reeves; Yahya Abdul-Mateen II as Cal Abar; Tom Mison as Mr. Phillips; Frances Fisher as Jane Crawford, Sara Vickers as Ms. Crookshanks and Hong Chau as the mysterious trillionaire, Lady Trieu.

Friendly Pig
5.0 out of 5 stars A Must See!
Reviewed in Australia on 24 June 2020
Verified Purchase
Once again Alan Moore's name is no where to be seen in this new production based more on his (and Dave Gibbons) comic book than the Zack Snyder film. I've enjoyed all three versions but never has there been a version that was so immediate and essential in its politics of today. Veritably ripped from the headlines we have the scourge of racist white supremacists as the bad guys (no surprise there) who've since co-opted Rorschach's mask to hide their faces, and even the police have been encouraged to do so, as it will potentially keep them safe from vigilante terrorists. With masked heroes also counted as terrorists, Laurie Blake (the one time Silk Spectre) and now in her 60's (?) works for the FBI to bring in all sorts of insurgents. Laurie is played by Jean Smart, unmasked, as battle weary, snarky and no nonsense. Sister Night (Played by the excellent Regina King, and who's story it is we mostly follow throughout), is both cop (undercover so that she wont be attacked for being a cop) but also a masked Hero who does the things the cops can't (or wont do), in a uncomfortable alliance with the Tulsa police force, headed by Don Johnson's Police Chief "Crawford". Intertwined with this story of her origins (and current day life in 2019) are those of the abysmal race relations that have soiled America for so long, and includes the horrific story of the Tulsa massacre of 1921. Opening in Greenwood in what'been retrospectively called "the Black Wall Street", i'm embarrassed to say i'd never heard of this terrible moment in history (hey i'm from Australia! I bet there are many Americans who've never heard about it either, largely cos it's such an ignominious event no doubt many have tried to pretend it never happened). As we approach the hundred anniversary it only became known to me in recent weeks as a result of the protests about police brutality towards black folks, and the indecent decision by Trump to hold a rally in Tulsa between that infamous date and what is known as Juneteenth. As men, women and children (of "colour") are gunned down in broad daylight and have their lives destroyed, their businesses burnt down, one surviving child has this seminal moment seared into his life for all time, and indeed it changes the concept of heroes and why they have masks. At first i thought this massacre was fictional, what with "Watchmen" oft given to distortions of history to further its story telling and fusing in its super heroes as part of the political paranoiac satire it is, i was shocked to discover this incident was entirely, horribly true. This makes it one very relevant piece of film making, as it attempts to redress the sins of the past, and showing us how far (or not ) we've come, not just in the racism in America since a hundred years ago, but how the effects of super heroes has altered for all time how we see crime and crime fighting , since the last Watchmen story...which ended sometime around about 1990 (?). What has become of Ozymandias (aka Adrien Veidt played with venal smugness by Jeremy Irons), and Jon Osterman (aka Dr Manhattan, the only character with genuinely supernatural powers), will be revealed with intriguing tension through out. New characters like Looking Glass, Pirate Jenny and Red Scare don't get much screen time, although Lady Trieu is a formidable opponent. Great performances (especially Regina as Angela Abar/Sister Night), terrific dialogue and plotting by Damon Lindelof (and co), slick (at times epic) production values and an exceptional soundtrack by Trent Reznor and Atticus Ross make this my number one choice for "best" tv series of 2020 (and the year's only just half way thru!). At a time when we're positively glutted with good quality entertainment (and hero stories), i'm kind of glad that this is a complete story of only 9 episodes. It's dark, brilliant, incendiary, and reminds us that the more things change, the more they stay the same. As "Watchmen" was likely completed before the Covid 19 pandemic, who would've thought a story about the efficacy of mask (will they keep you safe or not?) would find some analogical cache right now? Just one of the many prescient moments throughout this remarkable piece of television.
Read more
One person found this helpful
Helpful
Report abuse
See all reviews
Get FREE delivery with Amazon Prime
Prime members enjoy FREE Delivery and exclusive access to movies, TV shows, music, Kindle e-books, Twitch Prime, and more.
> Get Started
Back to top
Get to Know Us
Make Money with Us
Let Us Help You
And don't forget:
© 1996-2020, Amazon.com, Inc. or its affiliates