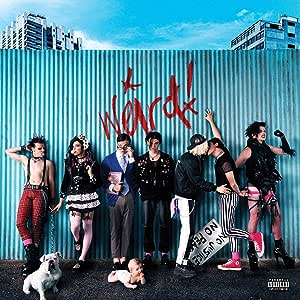 Secure transaction
Your transaction is secure
We work hard to protect your security and privacy. Our payment security system encrypts your information during transmission. We don’t share your credit card details with third-party sellers, and we don’t sell your information to others. Learn more
Details
Ships from
Amazon US
Sold by
Amazon US
New (6) from
$35.83 + $3.00 Delivery

4.8 out of 5 stars
4.8 out of 5
569 global ratings
How are ratings calculated?
To calculate the overall star rating and percentage breakdown by star, we don’t use a simple average. Instead, our system considers things like how recent a review is and if the reviewer bought the item on Amazon. It also analyses reviews to verify trustworthiness.

Johnny Land
5.0 out of 5 stars A solid follow up album from the Doncaster singer
Reviewed in the United Kingdom on 21 March 2021
Verified Purchase
As much as I'd heard of Yungblud before I hadn't really been a fan of his music until last year.

And then the title track of the album 'Weird' came out about a year ago, and I started really getting into his stuff.

I can't recommend this album enough, as there's lots of songs on the album worth checking out.

'Weird' is probably one of my favourite songs on the album, as it kind of feels as though Dom is trying to reassure everyone listening that everything will be ok and that we'll get through this.

Which we will, hopefully, as I think 'Weird' kind of sums up this past year of the pandemic.

I love how relatable Dom's music is though, as it feels like I can relate to what Dom's talking about, especially in 'God Save Me Don't Drown Me Out', another of my favourites on the album.

This is where he talks about his insecurities, something I think we can all relate to.

I can't recommend this album enough for those looking for a great album to rock out to, as I can imagine people going crazy for tracks like 'Charity' live when he's next on tour.

Keep up the great tunes Dom and being a voice for those that feel like they're outsiders, a bit like myself.

Glen Mitchell
5.0 out of 5 stars Enjoyed this Album very much!
Reviewed in the United Kingdom on 28 February 2021
Verified Purchase
A great addition to my collection! Superb quality in every respect!
Read more
Report abuse

B M Preller
5.0 out of 5 stars Weird and wonderful!
Reviewed in the United Kingdom on 12 January 2021
Verified Purchase
Great Album.just what I needed...🙂
Read more
Report abuse

Amazon Customer
4.0 out of 5 stars Good music
Reviewed in the United Kingdom on 24 January 2021
Verified Purchase
No comments
Read more
Report abuse
See all reviews
Back to top
Get to Know Us
Make Money with Us
Let Us Help You
And don't forget:
© 1996-2021, Amazon.com, Inc. or its affiliates