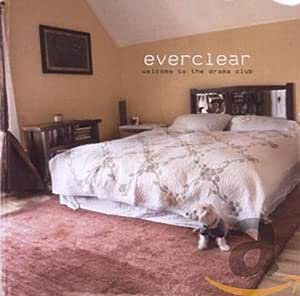 Welcome to the Drama Club

One of the most dominant bands of the '90s is back. Fueled by the powerful songwriting of Art Alexakis, the single "Hater" is a return to the sound that scored Everclear several multi-platinum hits on alternative rock and MTV, including mainstays like "Santa Monica", "Father Of Mine", "Everything To Everyone", "I Will Buy You A New Life", and "Wonderful". "Art Alexakis is one of the only rock stars around with anything to say about real life" - Rolling Stone.

3.8 out of 5 stars
3.8 out of 5
12 global ratings
How are ratings calculated?
To calculate the overall star rating and percentage breakdown by star, we don’t use a simple average. Instead, our system considers things like how recent a review is and if the reviewer bought the item on Amazon. It also analyses reviews to verify trustworthiness.

Mattallica
4.0 out of 5 stars Selling the Drama
Reviewed in the United Kingdom on 31 January 2008
Verified Purchase
Its easy to be sceptical when a band decides to change its line-up in dramatic fashion. Frontman Art Alexais was, still and always will be the driving force that determines Everclear. Although this opus marks a new era for the band, traces of the 'old' Everclear still exist. Lead single 'Hater' could easily fit onto 'So Much for the Afterglow' whilst 'Glorious' would not seem out of place on 2003's 'Slow Motion Daydream'. However, as one of the most innovative yet criminally underrated songwriters of our time, Art Alexais still got what it takes to deliver some top quality tunes including the funktastic 'Taste of Hell', the uplifting 'Shine' and what is considered to be the standout track 'Drama King'. 'Welcome to the Drama Club' is most defintely a welcomed return from one of America's finest rock bands!
Read more
One person found this helpful
Report abuse

K. H Mark
5.0 out of 5 stars Different band, same direction
Reviewed in the United States on 18 June 2007
Verified Purchase
With a new band lead singer Alexakis take the group in a slightly different musical direction. While the lyrics are the same familiar style of previous albums the music is more creative and less powerful than their previous work. Still, when needed they punch out emotional and hard rocking songs like "Hater" and "Taste of Hell". I found this album really grew quickly, but it took a few listens. Unlike many who have reviewed their music I feel that they are getting better with every release, creative yet true to their style. Standouts for me are "Now", "Hater", "Drama King", "Glorious", and "Portland Rain". Each song is creative and brings something to the table. I remember cranking their music over 12 years ago in Seattle and it's nice to see them continue growing as a band. True fans will not be disappointed.
Read more
3 people found this helpful
Report abuse

Longday
4.0 out of 5 stars A very nice surprise
Reviewed in the United States on 15 March 2007
Verified Purchase
I was fully expecting to hate this CD. I love Everclear's oldies, but honestly, could find nothing I liked on Slow Motion Daydream. In my opinion, the better part of the content of that CD was crass, and most of the rest just wasn't very inspiring or creative. Therefore, I figured that Art had just run out of steam...once he had exhausted his supply of songs focusing on drug abuse (Sparkle and Fade, So Much for the Afterglow) and relationship issues (Songs From an American Movie), I wasn't sure what else he could write about - bankruptcy doesn't seem like a very appealing subject. :)

I'd listened to Hater online and really didn't think too much of it - kind of repetitive and sounded like it could have come off Slow Motion Daydream, but after reading the reviews here, I realized that those who were slagging this CD were actually slagging the band, not the CD (see my comment in response to one). Think what you may of the band, but this is a review of the album, regardless of the make up of the band or your views on Art Alexakis. So, after seeing them live recently (they rocked!) and liking Portland Rain live, I bought the album in the hopes that I'd at least get a song or two that would be listenable.

It really is an easy CD to listen to first time - something that's hard to achieve in anything but a radio-happy sell out. Subsequent listens take you deeper and deeper into the layers of the songs, and the content is definitely there. What I'm enjoying about this album is that the characters have been developed. The Drama King is reminiscent of some earlier songs that demonstrate empathy for the female perspective (Amphetamine and others), while the confessional Now shows a personal growth I haven't seen in Art's writing previously. Portland Rain, while a beautiful demonstration of longing, maintains its angry edge and doesn't descend into self-pity. Clean is a touching plea to his daughter, and one that most parents can relate to - wanting the best for their child and hoping like hell you don't let them down.

For the most part, Art seems to have got his head together, but then, we've all thought he's done that before (as he's probably thought also). There's definite growth in his writing on this album, and musically, this is a creative, diverse offering. Maybe that's thanks to the new line-up, or maybe it's Art back on track. Whatever, it's good - the larger band definitely gives the album a fuller sound without turning to fluff.

I guess my only gripes are the name and cover - I mean really, how cliche? If you can get past that though, you'll enjoy it - well, until you hit Annabella's truly horrid and cringe-worthy rap/harmonica piece right before Your Arizona Room. I don't know what Art had done that he had to make it up to his 13 year old daughter by giving her a "silent" track amongst the actual CD (seriously, Art, could you not have let her do it after a 10 minute silence after the last track or something? No, Art, it isn't cute, and she isn't that talented...why don't you sponsor her own CD so it doesn't screw up yours?), but it is terrible. Annabella, sweetie, if you're reading this, I'm sorry and keep trying to create music, but don't make your Daddy put it on his CD when he's trying to make a come back, ok?

Right, now that's out of my system, my overall impression of the CD is that this is a worthy return to form after the dismal Slow Motion Daydream. Welcome back!

James Memphis
2.0 out of 5 stars Not a great cd
Reviewed in the United States on 19 January 2020
Verified Purchase
I love Everclear, especially the lyrics, but this one didn't do it for me. It's Everclear so not one star, but I rate a two.
Read more
Report abuse
See all reviews
Get FREE delivery with Amazon Prime
Prime members enjoy FREE Delivery and exclusive access to movies, TV shows, music, Kindle e-books, Twitch Prime, and more.
> Get Started
Back to top
Get to Know Us
Make Money with Us
Let Us Help You
And don't forget:
© 1996-2020, Amazon.com, Inc. or its affiliates