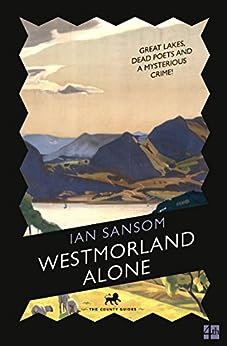 by Ian Sansom (Author) Format: Kindle Edition
See all formats and editions
Sorry, there was a problem loading this page. Try again.

Welcome to Westmorland. Perhaps the most scenic county in England! Home of the poets! Land of the great artists! District of the Great lakes! And the scene of a mysterious crime…

Swanton Morley, the People’s Professor, once again sets off in his Lagonda to continue his history of England, The County Guides.

Stranded in the market town of Appleby after a tragic rail crash, Morley, his daughter Miriam and his assistant Stephen Sefton find themselves drawn into a world of country fairs, gypsy lore and Cumberland and Westmorland wrestling. When a woman’s body is discovered at an archaeological dig, for Morley there’s only one possible question: could it be murder?

Join Morley, Miriam and Sefton as they journey along the Great North road and the Settle-Carlisle Line into the dark heart of 1930s England.

Praise for Death in Devon:

‘Much recommended for a frolicsome read’ Country Life Magazine

‘The magnificent Morley is very good company, and Sansom has a lovely way with a mind-bending puzzle … superbly entertaining’ The Times

Praise for ‘The Norfolk Mystery’:

Ian Sansom is the author of Paper: An Elegy and the Mobile Library Mystery series of novels. He is also a frequent contributor to the Guardian and the London Review of Books, and a regular broadcaster on BBC Radio 3 and Radio 4. The Sussex Murders is the fifth in his County Guide series, following The Norfolk Mystery, Death in Devon, Westmorland Alone and Essex Poison. --This text refers to the hardcover edition.

4.2 out of 5 stars
4.2 out of 5
20 global ratings
How are ratings calculated?
To calculate the overall star rating and percentage breakdown by star, we don’t use a simple average. Instead, our system considers things like how recent a review is and if the reviewer bought the item on Amazon. It also analyses reviews to verify trustworthiness.

peterl
4.0 out of 5 stars The Best of the Guide series so far.
Reviewed in the United Kingdom on 31 May 2016
Verified Purchase
Compared to Ian Samson's earlier books, I found the first two County Guides (Norfolk and Devon) a bit too lightweight. Full of good jokes, but too sketchy and lacking a solid plot. Westmorland Alone is very different and much improved. The laughs are still there, but there are some really dramatic and emotional episodes within the story which make it far more satisfying.
My only reason for not going to 5 stars is that it all seemed to be over so quickly! Despite that, I shall be eagerly awaiting the next in the series.

Amazon Customer
5.0 out of 5 stars Going from strength to strength
Reviewed in the United Kingdom on 31 May 2020
Verified Purchase
The most enjoyable of the series so far. The best stories of the genre are Howdunnits or Whydunnits rather than Whodunnits, which is why I'll take a Sayers over a Christie any day. If you feel the same, then you will find that these are intelligent stories, told with humanity and humour: dive in and enjoy!
Read more
Report abuse

Janeytee
5.0 out of 5 stars Arrived quicly
Reviewed in the United Kingdom on 25 October 2021
Verified Purchase
Good condition. On the shelf to be read laters!
Read more
Report abuse

steady
5.0 out of 5 stars Very readable
Reviewed in the United Kingdom on 12 May 2017
Verified Purchase
Very readable and an unusual take on the crime novel.
Read more
Report abuse

MusicMan
4.0 out of 5 stars Can't wait for the next one now.
Reviewed in the United Kingdom on 20 June 2016
Verified Purchase
Another romp around Britain. A good story, lovely detail and nostalgia coursing through it's veins. I await the next instalment with eager anticipation.
Read more
Report abuse
See all reviews
Back to top
Get to Know Us
Make Money with Us
Let Us Help You
And don't forget:
© 1996-2022, Amazon.com, Inc. or its affiliates