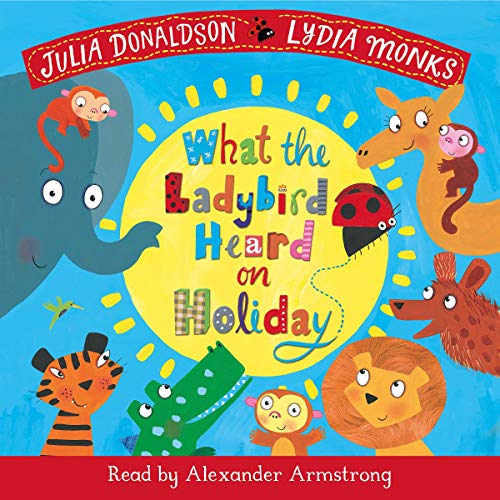 What the Ladybird Heard on Holiday

4.8 out of 5 stars
4.8 out of 5
2,666 global ratings
How are ratings calculated?
To calculate the overall star rating and percentage breakdown by star, we don’t use a simple average. Instead, our system considers things like how recent a review is and if the reviewer bought the item on Amazon. It also analyses reviews to verify trustworthiness.

Genevieve Chua
5.0 out of 5 stars must buy
Reviewed in Australia on 23 July 2021
Verified Purchase
S4.99 a bargain!
Was skeptical about this series at first but it is as good as the JD books. My little one loves this book and we have been reading this every night for the past week. Delightful combi of zoo animals, dogs etc. Concept of bad guys might be a bit scary but it is a good ending.
Read more
Helpful
Report abuse

Amby b
5.0 out of 5 stars Love this series
Reviewed in Australia on 22 August 2021
Verified Purchase
We have all the other 'what the ladybird heard books'
Always so much fun, love the rhyming and the lighthearted bad guys in the book.
Read more
Helpful
Report abuse
See all reviews

Once again this is a funny tale from Julia Donaldson with colourful and iconic illustrations by Lydia Monks. Miss B loved listening to this book, copying the animal noises and talking about the illustrations. My daughter enjoyed it so much that once we had finished she wanted me to read it again straight away. She then also had it read to her again at bedtime – I think it has her approval!
Read more
21 people found this helpful
Report abuse

axelariat
4.0 out of 5 stars Bright snd enjoyable, but long.
Reviewed in the United Kingdom on 13 March 2019
Verified Purchase
Lovely book, beautiful illustrations. Main difference between this and "What the ladybird heard" and "what the ladybird heard next", is that this is much longer, so younger children may find this is a bit long for a bedtime story. It's also a large format paper page book, rather than the small board book I am used to. Nevertheless, its a nice story with familiar characters, and vibrant illustrations as usual.
Read more
6 people found this helpful
Report abuse

Thomas Edison
5.0 out of 5 stars A Great Addition to the Series of What the Ladybird Heard
Reviewed in the United Kingdom on 27 July 2017
Verified Purchase
Having already bought the other 2 books in this series which were extremely well received this was a must purchase. We were not disappointed.
The story and the illustrations are first class. This book really exudes quality. Everything about it from the hard cover and down to the glitter on the pages make it feel something special.
We have enjoyed it so much that we already wondering where the ladybird may go next.
Read more
6 people found this helpful
Report abuse

Warbs_l
5.0 out of 5 stars Great bedtime story
Reviewed in the United Kingdom on 8 August 2017
Verified Purchase
We were very excited to see another ladybird story in the series my 6 & 4yr old girls both love these stories and they are a regulars for our bedtime routine. Again this book doesn't dissapoint, great story based around the original script but with a twist. Lovely colourful pages with great drawings and the girls love he glitter. We will always enjoy these books and hope another won't be long behind this one
Read more
7 people found this helpful
Report abuse

B. A. Taylor
5.0 out of 5 stars A new bedtime favourite
Reviewed in the United Kingdom on 10 August 2020
Verified Purchase
I bought this for a lockdown treat for my granddaughter, she loved it.
It kept her reading during the period away from school, and often read to us over FaceTime.
Read more
2 people found this helpful
Report abuse
See all reviews
Back to top
Get to Know Us
Make Money with Us
Let Us Help You
And don't forget:
© 1996-2021, Amazon.com, Inc. or its affiliates