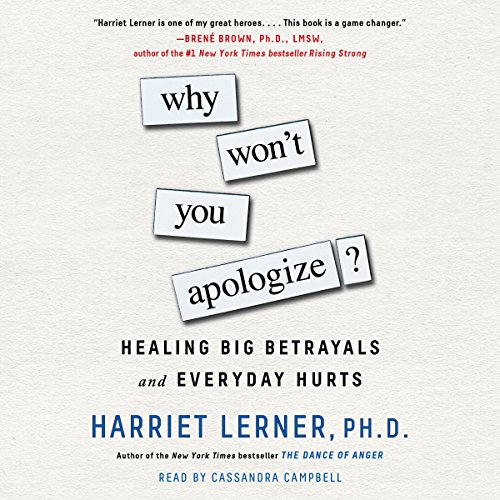 Why Won't You Apologize?: Healing Big Betrayals and Everyday Hurts

4.7 out of 5 stars
4.7 out of 5
643 global ratings
How are ratings calculated?
To calculate the overall star rating and percentage breakdown by star, we don’t use a simple average. Instead, our system considers things like how recent a review is and if the reviewer bought the item on Amazon. It also analyses reviews to verify trustworthiness.

Bruce Leighton
4.0 out of 5 stars Insightful and enormously helpful
Reviewed in Australia on 24 December 2017
Verified Purchase
Great read, no nonsense easy to follow practical examples. Relatable ways we apologize or not. For those who seek understanding of self and others
Read more
Helpful
Report abuse
See all reviews

Emi Bevacqua
4.0 out of 5 stars Thought Provoking
Reviewed in the United Kingdom on 23 June 2020
Verified Purchase
Dr Lerner covers but also goes beyond the standard what-makes-a-good-apology-or-a-bad-apology, explaining the proper response to a good apology is "Thank you for the apology. I appreciate it" and that you do not necessarily have to accept every apology 100%, for example, "If you see the problem as my reaction, and not what you said, I'm afraid I can't accept your apology".

What I most appreciate are her focus on the fact that sometimes there is no apology or even reasons or explanations forthcoming, regardless of how much you deserve or want them; and her generous explanations for dealing with that. This chunk in particular, about a woman who transitioned from "I'm the wronged one and I'm the one who's suffering" to speaking her truth and finding peace, really spoke to me:

...she realized that at some level he could not be as happy as he appeared or even believed himself to be, because people who deceive and diminish others are not deeply happy and fully at peace with themselves. Letting go of anger requires us to give up the hope of a different past along with that of a fantasized future. What we gain is a life more in the present, where we are not mired in prolonged resentment that doesn't serve us.
Read more
4 people found this helpful
Report abuse

J. Oxford
5.0 out of 5 stars Absolutely amazing book
Reviewed in the United Kingdom on 10 May 2017
Verified Purchase
Absolutely fantastic book - life changing. From simple everyday misdemeanours to those that cut really deep, this book helps you understand why the words "I'm sorry" are so important, especially when said properly. Helps you understand why someone can't apologise and how to move past the ones you are owed.
Read more
9 people found this helpful
Report abuse

Amazon Customer
5.0 out of 5 stars Brilliant, helpful and fascinating, but one story troubled me...
Reviewed in the United Kingdom on 8 September 2017
Verified Purchase
I haven't yet reached the end of this book yet but am rating it 5 stars as I'm finding it a brilliant read- very well-written, positive and extremely helpful in enabling people to understand each other better (whether you are frustrated with someone who won't apologise or need advice making amends with someone you've offended).

I also really liked the chapter dealing with "forgiveness" which breaks down the widespread myth that it's essential to forgive someone who hurt you in order to be positive, healthy and happy. While I do think forgiveness is very important when the other party deserves it and if it's a relationship that is important to you, I agree with the author that it is also possible to heal, let go and move on without having to forgive the other party if the transgression was unforgiveable. As a survivor of an abusive relationship that culminated in my ex boyfriend trying to kill me after I broke up with him, I cannot ever forgive him for what he did to me, but I was also able to eventually heal and move on with a positive outlook on life, so I am living proof that Harriet is right! (For me, the old saying that living well is the best revenge is 100% true... life often isn't fair and sometimes people will do terrible things to you and not be adequately punished, but by focusing on yourself and positive growth you can still find happiness. Personally, my brush with death made me appreciate life even more, and I now have a more positive attitude than many other people who have led much easier lives than I have!)

However, I wanted to raise a question regarding the case study story of Letty and Kim as I found an aspect of that story disturbing. This is NOT a criticism of the author, it's a question about the laws in the US regarding molestation/paedophilia. I'm not American so I wondered if American readers could answer this question. After Letty discovered that her daughter Kim had been molested at 12 years old by her father, her response was to "get the whole family into therapy". There was no mention in the story of Kim's father being prosecuted for his crime and that really shocked me, especially knowing that the family therapist must have heard the full story. Kim's father had committed a crime, so wasn't that family therapist obliged to notify the police, regardless of Letty not pressing charges? What are the laws in the US regarding this? I found it sickening that while Kim's father received therapy, he faced no legal penalty for abusing his daughter.
Read more
6 people found this helpful
Report abuse

Myhonestopinion
5.0 out of 5 stars A must read for people wanting deeper connection with others
Reviewed in the United Kingdom on 21 May 2021
Verified Purchase
What a great insightful book. I really wanted to understand in more depth why some people in my life will never apoligise at any cost apologise. What i didnt expect to learn is that my own apologies were falling short, I thought I was good at apologising! I have followed the guidance on how to make sincere apologies which has allowed a greater deeper connection in my close relationships as result.
Read more
Report abuse

Katiej.p
5.0 out of 5 stars Everyone should read this!
Reviewed in the United Kingdom on 10 July 2021
Verified Purchase
Wonderful introduction to the power of empathy and real connection. Readable sensible but not patronising, shares responsibility with guidance for real progress. Highly recommended and important understanding for successful friendships and relationships
We should learn this earlier in life!
Read more
Report abuse
See all reviews
Back to top
Get to Know Us
Make Money with Us
Let Us Help You
And don't forget:
© 1996-2021, Amazon.com, Inc. or its affiliates