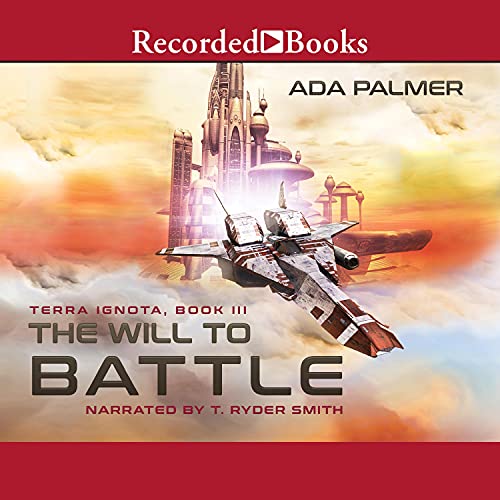 The Will to Battle: Terra Ignota, Book 3

The long years of near-utopia have come to an abrupt end. Peace and order are now figments of the past. Corruption, deception, and insurgency humwithin the once steadfast leadership of the Hives, nations without fixed location.

Switch between reading the Kindle book & listening to the Audible narration with Whispersync for Voice.
Get the Audible audiobook for the reduced price of $2.99 after you buy the Kindle book.
Learn more about membership
By completing your purchase, you agree to Audible’s Conditions Of Use and Privacy Notice.
Sold and delivered by Audible, an Amazon company

4.5 out of 5 stars
4.5 out of 5
154 global ratings
How are ratings calculated?
To calculate the overall star rating and percentage breakdown by star, we don’t use a simple average. Instead, our system considers things like how recent a review is and if the reviewer bought the item on Amazon. It also analyses reviews to verify trustworthiness.

DanTheMan
5.0 out of 5 stars Fantastic 3rd Book
Reviewed in the United Kingdom on 15 January 2018
Verified Purchase
Fantastic 3rd book. The character development of Mycroft is brilliant in this one. Better than the other two and more nuanced. The pace is a bit faster than the other two books and the style of writing is now cemented and easy going.
I've honestly know idea why this series isn't a massive seller. It has the complexity of Sci-Fi books that have been absence since the development of main-stream novellas.
Can't wait for the next books.
Read more
2 people found this helpful
Report abuse

Amazon Customer
5.0 out of 5 stars Immense
Reviewed in the United Kingdom on 7 July 2020
Verified Purchase
This is a wonderful extension to the other books and expands the story in surprising and entertaining ways. It is not a page Turner and requires concentration to follow the large amount of characters each critical to the story but is very rewarding and a master piece of imagination.
Read more
Report abuse

Lawrence A.
5.0 out of 5 stars Incredible
Reviewed in the United Kingdom on 24 April 2018
Verified Purchase
I just can't get over how beautifully detailed this world and it's characters are. The whole set of books has consumed the past 2 months of my life entirely.
Read more
One person found this helpful
Report abuse

Pascal
3.0 out of 5 stars To metaphysical, too melodramatic, too ambitious
Reviewed in Germany on 16 April 2021
Verified Purchase
I'll own up: I read the three books in about as many days, because I wanted to know what would happen. So I definitely wasn't bored by the books. And the political maeouvering is, if not too realistic, very much fun to read (for me, anyway). Plus I have a fondness for ancient Greece and Rome, so I had fun imagining Romanova and Mason's empire.

But: I skimmed/skipped about three fourths of the book. Why? Because the metaphysical drivel about God(s), and the philosophical drivel about the ideas of Hobbes, Rousseau, Voltaire, Diderot took up so much space. It was bad enough in the first two books. The third goes completely overboard, so much that the plot almost comes to a standstill. I get it that the author knows a lot about the history of philosophical ideas. I even share her interest in it to a degree, being a historian myself. But filling hundreds of pages of an SF book with it without making clear it's relevance to the story (and I fear most of it is just smoke - I don't think she'll be able to convincingly tie it all together in the fourth book) just doesn't work for me. It's not interesting, especially if you're already somewhat familiar with the material. It gave me a few pointers to stuff I hadn't known, but mostly I found it annoying and overengineered.

Orson Scott Card (whose early work is very good if you're interested in morals, ethics and religion, even though he seems to have lost his knack somewhere at the start of the 21st century) once wrote that Science Fiction is the perfect medium to discuss questions about God exactly because God is absent from the SF universe - and serious discussion of religious questions is impossible in Fantasy, where God(s) is/are (often) known to exist and have a hand in the plot. I wish Palmer had thought about this. While Palmer's approach with J.E.D.D. Mason and his "dialogue" with this universe's God is, to my knowledge, unique (and the idea is brilliant IMO), if she wanted to write a book about the search for God, she should have stuck to that topic. It simply doesn't work as one of multiple themes raised in her Terra Ignotia universe.

Also, the story is starting to get lost in melodrama. Mycroft is breaking down weeping pretty much on every second page now (if he isn't discussing philosophy with the reader, or Thomas). There's a war brewing, with the two leaders each trying to kill each other, but the Olympics (in Antarctica!) are used as a great test for mankind to show what we can be - there's a truce declared according to ancient custom, and one of the future war leaders competes in the olympics (despite running the risk of being aprehended by the other side), and the other leader offers himself up to be killed by the other in front of everyone - but, you know, both do not fail the great test. Meanwhile, the Mars colony is giving up precious oxygen to have fireworks on Mars, because, you know, symbolism (Guess how Mycroft reacts...).

Finally, again, like in the other two books, things happen for plot reasons, not because they make any sense. Just three examples (with minor SPOILERS): First: Why would the European Union, with it's carefully cultivated democracy, suddenly declare the Spanish Royal house as *hereditary* emperors to be their "collective conscience"? You'd think people know a bit of history in the 25th century. That only happens because it will lead to further political problems needed for plot reasons. Second: The Utopians leave Cato Weeksbooth in the custody of the alliance, but then snatch him away when all the hives want him for themselves. Why on earth do they do that? Or why did they not do it right away? Answer: Because the plot requires it. Third: Why is Mycroft Canner still at large running errands, after he was exposed to the public in the second book and can't go anywhere without being in mortal danger? Answer: Because the plot requires it.

I commend Palmer for creating the world of Terra Ignotia. It's fun to imagine and the politics are interesting to read about. But IMO, she can't deliver (yet) on her own ambitions. I'll likely continue reading her work, but I hope she'll be content with less ambitious projects in the future, and control her need for adding primers on political philosophers. Her books would be the better for it.
Read more
Report abuse
See all reviews