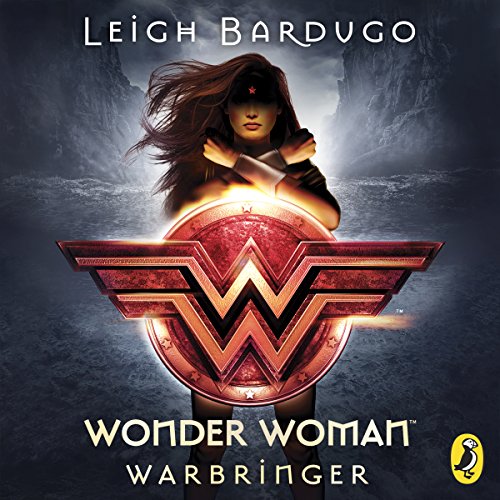 She will become a legend, but first she is Diana, Princess of the Amazons. And her fight is just beginning....

Diana is desperate to prove herself to her warrior sisters. But when the opportunity comes, she throws away her chance at glory and breaks Amazon law to save a mere mortal, Alia Keralis. With this single heroic act, Diana may have just doomed the world.

Alia is a Warbringer - a descendant of the infamous Helen of Troy, fated to bring about an age of bloodshed and misery. Diana and Alia will face an army of enemies, mortal and divine, determined to destroy or possess the Warbringer.

To save the world, they must stand side by side against the tide of war.

Switch between reading the Kindle book & listening to the Audible narration with Whispersync for Voice.
Get the Audible audiobook for the reduced price of $9.49 after you buy the Kindle book.
Learn more about membership
By completing your purchase, you agree to Audible’s Conditions Of Use and Privacy Notice.
Sold and delivered by Audible, an Amazon company
Share

4.5 out of 5 stars
4.5 out of 5
593 global ratings
How are ratings calculated?
To calculate the overall star rating and percentage breakdown by star, we don’t use a simple average. Instead, our system considers things like how recent a review is and if the reviewer bought the item on Amazon. It also analyses reviews to verify trustworthiness.

bunyip
4.0 out of 5 stars ANYWAY I LOVE WONDER WOMAN.
Reviewed in Australia on 19 April 2018
Verified Purchase
The first in an action-packed YA series featuring DC Icons Wonder Woman, Batman, Superman and Catwoman.

“Is something wrong?” Diana asked, planting her [naked] hands on her [naked] hips as if she were about to start a [naked] cheerleading routine.
“Absolutely not,” said Nim. “Jason, Alia, you shut your mouths. I fell out of a plane. I got possessed by a war goddess. I deserve some happiness.”

I gasped out loud at the “You looked like buried treasure line” like some sort of heterosexual. It’s so good. It’s delightful.

K. G. A. Alavi
3.0 out of 5 stars A heroes quest
Reviewed in the United Kingdom on 17 January 2018
Verified Purchase
An ok to good book. I would have liked to give it 3.5 stars. There are parts of the book that are really good but there are some very slow. I think part of what I had to overcome in this story, was forgetting everything I already knew about Wonder Woman. I think Leigh Bardugo did a great job of Diane, but not quite as great on Wonder Woman. However this is not a bad thing as in this story, Diane is quite a bit younger then previous incarnations of her have been, and has all the inexperience and insecurities of growing up. Therefore she should not by the warrior she is to become yet.

This is a complete remake of the origin story. It is set in the modern world not in World War 2 time. One subtle point I really liked was when Diane and the Amazon’s talk about “man’s world” they don’t just mean men but mortals in general. I liked all the side characters in the book, I think they were written really well except when the Greek “Gods” appeared. I know Wonder Woman’s history is based on Greek mythology, and if they were just mentioned that was fine, but a couple of times they appeared I still do not understand why, and the other I think the story would have been better for Diane to triumph or fail on her own. I would have also liked more fight in the story considering her warrior heritage. Though I did like the final fight, the the one before that sucked.

All in all a good take new take on Diane. I would not mind a continuation of this incarnation of Diane to returns as the true warrior/Wonder Woman, I think there is enough left to warrant that.
Read more
3 people found this helpful
Report abuse

Michele
5.0 out of 5 stars More please!
Reviewed in the United Kingdom on 20 September 2017
Verified Purchase
I have never read the WW comics nor seen either the TV show or the new movie, so I came to this 'origin'/coming-of-age story with very little knowledge of the character, of whom Wonder Woman is or is supposed to be. None of which hindered my enjoyment in any way.

I was sufficiently engaged by the story to want a sequel, and to want to read some of the comics.
Read more
Report abuse

Lilac Hell
4.0 out of 5 stars Thoroughly enjoyable
Reviewed in the United Kingdom on 26 February 2021
Verified Purchase
I enjoyed this so much, it made me watch the films, which were a disappointment! I hope this one gets made into a movie. Love Leigh Bardugo, she can do no wrong.
Read more
Report abuse

Nikol
1.0 out of 5 stars Wouldn’t recommend it even if they paid me for it
Reviewed in the United Kingdom on 7 October 2018
Verified Purchase
Terrible book. It could be about anyone, they made Diana into one of those nondescript heroines that you can find in most of the books aimed at “young adults”.
Read more
Report abuse

Amazon Customer
4.0 out of 5 stars An ok book with a brilliant end
Reviewed in the United Kingdom on 17 January 2021
Verified Purchase
It was a little slow with a few good action points that made the first 2/3 of the book. The last 1/3 was brilliant and brought the book up from 3 stars to 4
Read more
Report abuse
See all reviews
Back to top
Get to Know Us
Make Money with Us
Let Us Help You
And don't forget:
© 1996-2021, Amazon.com, Inc. or its affiliates