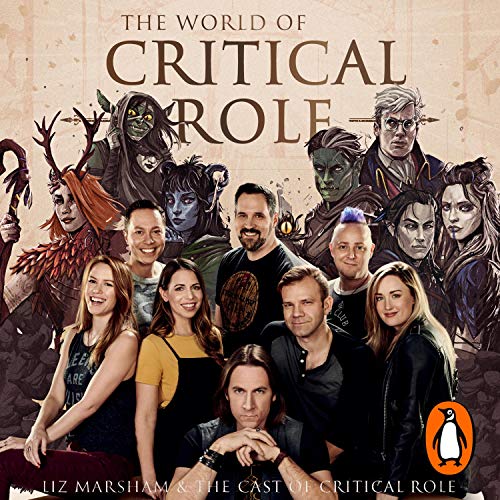 The World of Critical Role: The History Behind the Epic Fantasy

Dive deep into the history of the world's most popular fantasy RPG livestream with the cast of Critical Role in this definitive guide.

From its unassuming beginnings as a casual home game between friends to the role-playing phenomenon it is today, Critical Role has become the stuff of legend. This audiobook chronicles how a circle of friends who all happen to be talented voice actors built the most-watched tabletop role-playing livestream of all time.

Discover richly written insights into the locations, characters and adventures featured in the hundreds of episodes across Critical Role's two campaigns, Vox Machina and the Mighty Nein. Go behind the scenes with exclusive interviews with Dungeon Master Matt Mercer and the entire Critical Role cast as they explore their characters' most triumphant moments and darkest hours. And celebrate the massive community of Critters who support and expand the show's world through a highlighted tour of the crafts, cosplay and art they create every day.

Featuring a foreword from Felicia Day and the inside story you won't find anywhere else, this audiobook is your indispensable guide to Critical Role.

4.9 out of 5 stars
4.9 out of 5
2,465 global ratings
How are ratings calculated?
To calculate the overall star rating and percentage breakdown by star, we don’t use a simple average. Instead, our system considers things like how recent a review is and if the reviewer bought the item on Amazon. It also analyses reviews to verify trustworthiness.

Thomas Smith
5.0 out of 5 stars Amazing book for fans of the show
Reviewed in Australia on 15 November 2020
Verified Purchase
There is so much information in here, both about how the game started and details of the characters (both PCs and NPCs) in the game.
Read more
Helpful
Report abuse

PictoPirate
5.0 out of 5 stars Fan Service at it's Finest
Reviewed in the United Kingdom on 21 March 2021
Verified Purchase
The World of Critical Role: The History Behind the Epic Fantasy is a wonderful companion piece to the brilliant show. Anyone who knows me will know that I'm a sucker for Critical Role. I've listened to all of the podcast, read the graphic novels and literally bought the t-shirt. This was always going to be a home run for me, and unsurprisingly, I loved it.

This book goes into the characters and the story of the games and goes back to the home game that spawned it all. It is almost as amazing how this came to be as the effect it has had on the community and the wider world.

This little show spawned a TV show, graphic novel, charity, and a whole community of the most wonderful, welcoming, talented people in the world and this book covers them all. There are deep dives on all of the players, a look a the community and the charity work and a whole bunch of amazing art. This is basically one giant Critter hug that just makes you smile.

If you're a fan of the show, you'll love this book. If you're not, well, read it anyway to get a story of how a few people and a few dice changed the world for the better. It is a great story.
Read more
One person found this helpful
Report abuse

Godfather Morlock
4.0 out of 5 stars Good, but not enough behind-the-scenes content.
Reviewed in the United Kingdom on 22 May 2021
Verified Purchase
This book is a great introduction to CR...but I can't imagine many readers will not already be fans. There's a lot of material here that critters will already know: intro to D&D, synopses of character arcs, outlines of the Vestiges, and many anecdotes that we have already seen because we watch the show. There are bios for the entire cast which are nice, and some fascinating info about the process of bringing guests on.
I was hoping for more info that wasn't obvious from watching the show - the decision to set up as a company, the development of the set and lighting, the shift to their own studio, the technical setup, the production team, making the spinoff shows, or abandoned experiments like the chopper cam.
It's well-written and presented, but be prepared to plough through a lot of stuff you already know to find anything new.
Read more
Report abuse

K. Cutterbuck
4.0 out of 5 stars Good book, bad packaging from amazon
Reviewed in the United Kingdom on 23 November 2020
Verified Purchase
The good:The book is beautiful, full of lots of background information on both the cast and the characters they play. I’d definitely say someone who likes CR would love this

The bad: amazon seems to be messing up on the delivery of these books. The lower corner edge was completely messed up and I’m not the only the one whose received their book in this condition.
Read more
2 people found this helpful
Report abuse

Snowflake
5.0 out of 5 stars Present for Husband
Reviewed in the United Kingdom on 10 January 2022
Verified Purchase
He’s a big fan of Critical Role and apparently I’d surpassed myself by getting him it. He also pretty much ignored me during the time reading said book so I guess he enjoyed it more than my sparkling wit and conversation….
It’s worth it for any big fan of CR, expect your other half to be engrossed for hours.
Read more
Report abuse

User 979
5.0 out of 5 stars Beautiful book
Reviewed in the United Kingdom on 11 January 2021
Verified Purchase
I ordered this as a gift for my boyfriend who loves critical role. Me, having no interest in it what so ever, read the whole thing before giving it to him for xmas it was that nice and well written!
Read more
Report abuse
See all reviews