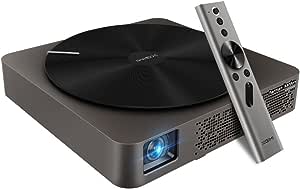 Brand: XGIMI
3.3 out of 5 stars 49 ratings
Secure transaction
Returns Policy
Your transaction is secure
We work hard to protect your security and privacy. Our payment security system encrypts your information during transmission. We don’t share your credit card details with third-party sellers, and we don’t sell your information to others. Learn more
Currently unavailable.
We don't know when or if this item will be back in stock.

3.3 out of 5 stars
3.3 out of 5
49 global ratings
How are ratings calculated?
To calculate the overall star rating and percentage breakdown by star, we don’t use a simple average. Instead, our system considers things like how recent a review is and if the reviewer bought the item on Amazon. It also analyses reviews to verify trustworthiness.

Stelios M.
1.0 out of 5 stars Look elsewhere if you value your money
Reviewed in the United Kingdom on 19 December 2016
Size Name: Z4 AuroraVerified Purchase
Very good and bright picture, but....
You have to be very careful before buying it, since the company has not told the buyers the whole story.

First, the Android version is the 4.3...almost 4 years old!!!! and, as XGMI support admitted in their forums, this way they can use cheap hardware which of course now cannot support newer app versions (that's why the projector is in some way on the cheap side), which means the issues will continue and probably get even worse, as this old Android version will not be able to support newer versions of the applications anyway.

Second, can only be used with external sources really(apple tv, laptop, e.t.c). Contrary to how it is advertised, most of the applications on the projector does not work properly or not at all (Youtube, airplay, Amazon Prime, e,t,c).

Third, support and support forums are useless, if I put it politely. Slow responses to queries (if you get a response that is), poor English (I can understand that not everybody speaks it fluently, I don't...but I try to make some sense, at the least).

A cheap projector, made by old redundant hardware and software.

If I knew the above things in advance would I still buy it? No way

James Carr
4.0 out of 5 stars Good... but watch the networked drives
Reviewed in the United Kingdom on 29 December 2016
Size Name: Z4 AuroraVerified Purchase
Image quality, sound quality and overall ease of use are good. Horizontal keystone correction is really useful. Downsides: Network device has mysteriously been wiped whilst connected to the projector though and no way of undoing/restoring 1TB of lost media files.

I was unable to use the in built miracast successfully but have limited success with downloading HappyCast.

I haven't figured out 3D yet. When using a HDMI source such as 3D Blu Ray on Xbox one, the in-video 3D menu is not available... whereas use the file manager app to play a 2D .mp4 or .avi file and the 3D sub menu is available. :/

Overall, happy with the purchase and it's better than a HD TV in my opinion.

Davide Zkaniasthen
1.0 out of 5 stars Happy till it turned yellow in less than 2 years
Reviewed in Canada on 21 June 2017
Size Name: Z4 AuroraVerified Purchase
Was happy as a kid for the past two years with my Z4 Aurora until the image turns yellowish today. This seems contrary to its claiming 30000 hours of bulb life. Very likely a manufacture quality issue and I realize it may not be easy to get it checked and serviced in North America. Am stuck with this baby I spent much money on.
Read more
One person found this helpful
Report abuse
See all reviews
Get FREE delivery with Amazon Prime
Prime members enjoy FREE Delivery and exclusive access to movies, TV shows, music, Kindle e-books, Twitch Prime, and more.
> Get Started
Back to top
Get to Know Us
Make Money with Us
Let Us Help You
And don't forget:
© 1996-2021, Amazon.com, Inc. or its affiliates