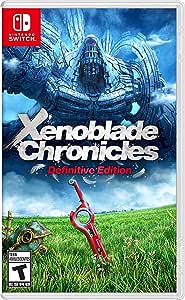 Discover the origins of Shulk as he and his companions clash against a seemingly-unstoppable mechanical menace. Wield a future-seeing blade, chain together attacks, and carefully position your party members in strategic, real-time combat as you journey across a massive world. Xenoblade Chronicles: Future Connected takes place one year after the main story and delves deeper into the relationship between Shulk and Melia in the face of a mysterious new threat. Whether youre a seasoned Monado wielder or brand new to the world of the Bionis, the updates and additions in this already-epic adventure make it even easier to dive into the story, combat, and environments that the Xenoblade Chronicles series is known for. Get immersed in the emotional story with updated graphics, listen to over 90 remixed or remastered music tracks, and track quests more easily with the additions and improvements in this definitive edition.

4.8 out of 5 stars
4.8 out of 5
3,788 global ratings
How are ratings calculated?
To calculate the overall star rating and percentage breakdown by star, we don’t use a simple average. Instead, our system considers things like how recent a review is and if the reviewer bought the item on Amazon. It also analyses reviews to verify trustworthiness.

Zach
5.0 out of 5 stars The Greatest Thing to Ever Exist
Reviewed in the United States on 7 June 2020
Platform: Nintendo SwitchEdition: Definitive EditionVerified Purchase
This is literally, bar-none, not only the greatest RPG, not only the greatest VIDEO GAME, but also THE GREATEST PIECE OF MEDIA TO EVER EXIST. This game is the pinnecle of the human race, the greatest thing to ever exist outside of Jesus himself.

It is the greatest thing to ever exist, and you can tell as soon as you enter the title screen. A beautiful, grassy field with a single crimson colored sword piercing the dirt below, all while the greatest piece of music ever composed, putting Mozart and Beethoven to shame, plays, titled "Birth of a New World."

It is the most gorgeous scene you will ever see in you insignificant mortal existance, and this is only the beginning of a beyond epic, immersive, 100+ hours, groundbreaking RPG and the greatest thing humanity has ever made. Forget the wheel, forget farming, forget the printing press, forget even spaceships, the game Xenoblade Chronicles is humanity's greatest creation, and nothing any being in all of existance can ever change that.

Xenoblade's story is breathtaking and emotional, with the best cast an RPG has even seen. Every single character is amazingly well written and endearing, with literally the only bad thing about the "worst main character" (Sharla) is that her character arc's forshadowing is "too obvious." If that is the worst thing you can find about a game's plot, then you are doing something right.

There are so many twist and turns that you never know what will happen next, (expect for the ones that Smash spoiled. Thanks a lot Sakurai.) making the story ever more interesting. Unlike it's sequel, not a single character is annoying or tropey, with every character being amazing and incredibly well written in almost every way.

The gameplay is also outstanding. Forgoing a traditional turn-based or action-based battle system, Xenoblade goes for a real-time MMO like system that while different and a bit simplistic, holds tons of depth and customization. Doesn't help that the game is incredibly well balanced too, with every both fight being equally challenging and strategic, with you never once feeling under or over leveled if you do a decent number of side-quests.

Speaking of side-quests, that was probably the only flaw with the original Wii version outside of the lackluster graphics, but luckily both of those issues are fixed tremendously in this definitive edition, turning an almost-perfect game into literal perfection.

There are over 100,000 sidequests in Xenoblade 1, all of not most of them being fetch quests. However, this is not nessessarily a bad thing, at least in the Switch version. In the original, you could only track one quest at a time, including main quests, making doing each and every one of the 100,000+ side-quests incredibly tedious. Not only that, but you had to also report back to the quest-giver once you finish like most RPGs, making the process even more tedious.

However, in the definitive edition, EVERY SINGLE QUEST is marked at ALL TIMES unless you manually turn them off. This marks things from monsters (and monsters who cam drop things needed for the quest) to collection items to NPCs. Along with that, as soon as a quest has met all of its requirements, the quest is immediately finished no matter where you are in the world, immediately giving you all the rewards instantly without you having to TP back.

While over 100,000 fetch quests would be infuriatingly annoying in literally any other game, (including the original and the 3DS version) due to the Switch version's upgrades to how quests work, sidequests flow as a natrual extension of the game, allowing you to easily complete sidequests as you venture around the beautiful, massive world of the two titans and follow the main story, giving you easy XP and Gold.

Speaking of beautiful, this along with it's sequel Xenoblade 2 might just be the best looking games of all time. While the first game was already stunning due to its amazing, unique artstyle and excellent world design, the Switch version looks 100x better. Makes sense, as every little model and texure was made from the ground up. While the lighter visuals and more anime-like artstyle may anger some hardcore fans of the original, as a lover of anime I absolutely love the new look the game has, keeping the gritty realism of the original while adding some much-needed brightness and anime flare.

Also, it would be a disgrace to talk about this game and not any speak of it's decent, but highly inferior sequel Xenoblade 2. While 2 looks even more pretty than 1 and has an even better soundtrack (rivaling even the great Bravely Default in terms of sound quality) the story suffers tremendously with somewhat bad voice acting in places, massive, random tonal shifts, pointless edgeness, tons of bad and overused anime tropes, and god-awful pacing. While Xenoblade 2 had some amazing waifus far overshadowing Xenoblade 1's offerings, the gameplay and story are far inferior. While the gameplay of 2 is far more complicated than 1, it's much less fun and far more tedious and time-consuming. That combined with a whole host of terrible gimicks and minigames along with a gatcha system straight out of a ftp moible game for blades, the MAIN MECHANIC OF THE GAME, (which luckily you can't spent IRL money on, which is nice I guess.) the gameplay, story, and characters are far inferior to 1 in almost every way, they only things truely overshadowing 1 being the music, graphics, and waifus. (Though Xenoblade 2 had plenty of TERRIBLE ones as well like Sheeba, Dahlia, Newt, Poppi Alpha, and the edgy ones.)

Overall, Xenoblade 1 is by far the greatest thing to ever exist, and you are a disgrace to the human race if you do not play this masterpiece-upon-masterpeice of a game. Thank you for reading.
Read more
67 people found this helpful
Report abuse
See all reviews
Back to top
Get to Know Us
Make Money with Us
Let Us Help You
And don't forget:
© 1996-2021, Amazon.com, Inc. or its affiliates