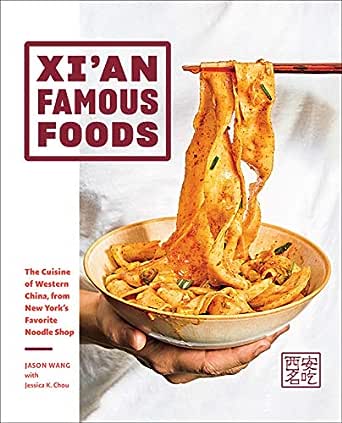 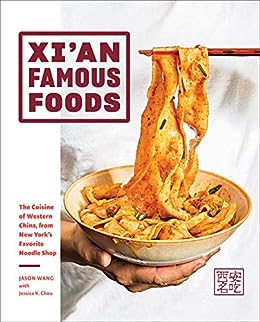 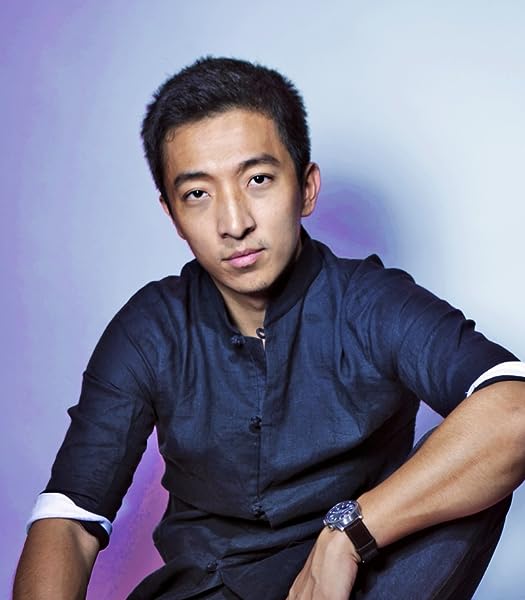 "In this highly anticipated cookbook, Xi'an Famous Foods CEO Jason Wang reflects on the humble beginnings of his family business, founded in Queens by his father in 2005. But he also introduces readers to his birthplace of Xi'an -- the city that inspired the iconic noodle shop's most adored dishes, like biang biang noodles seared in oil with cumin-rubbed lamb."-- "Travel + Leisure"

"Oftentimes, in cookbooks, the text is secondary to the recipes. But don't skip over the words in Xi'an Famous Foods--they serve as a cultural chronicle of both cuisine and the immigrant experience in America."-- "Vogue"

"The debut cookbook from the New York City restaurant chain Xi'an Famous Foods is worth picking up whether or not you have slurped the restaurant's hand-pulled noodles. This is a book on how to operate a food business -- CEO Jason Wang outlines five lessons to know before diving into the business and strips away the glamor of running a restaurant empire. It's also a food history of the flavors of Xi'an, China. With so many layers to appreciate, Xi'an Famous Foods is a prime example of what a restaurant cookbook can be."-- "Eater"

"This book, written by Xi'an CEO Jason Wang, offers basic cooking skills for noodle-freaks like me who are adept at ordering Western Chinese food but completely inept at cooking it. I'm a devoted customer at the Xi'an noodle shops but never imagined those chewy spiced dishes were easy to make at home."-- "CNN Travel"

"With its vibrant photography and storytelling, this book, written with Jessica K. Chou, is as satisfying to flip through as it is to cook from."-- "The New York Times"

"Xi'an Famous Foods is one of the few restaurants I always make sure to eat at when I visit NYC. I'm so excited that this cookbook provides a way for me to have their yummy dishes on the West Coast."
--Ali Wong

"Jason and his family have introduced a generation of New Yorkers to the flavors of his hometown of Xi'an. I've been thrilled to watch him turn the original shop into a small empire, where my friends now know liang pi, tiger vegetables salad, and Mt. Qi pork with hand-ripped noodles. This book will bring these dishes to broader audiences. The flavors are from Xi'an, but many of the dishes are inventive new combinations--native to New York."
--Jennifer 8. Lee "journalist and New York Times bestselling author of The Fortune Cookie Chronicles"

"No one has done more for the popularization of the flavors of northwest China in the US than Xi'an Famous Foods. This impressive new cookbook goes far beyond XFF's most recognizable dishes, providing a cultural education through Jason's personal lens. It's distinctly Xi'an Famous Foods, a blend of Chinese and American sensibilities."
--Serena Dai "editor of Eater NY"

"When I moved to New York to open Pok Pok, I ate at Xi'an Famous Foods probably two or three times a week for months, working my way through the menu of dishes that were unknown to me at that time but came blazing right up my alley. The spicy, herbaceous, meaty flavors and textures of Xi'an cuisine bowled me over; I was hooked. Today, I no longer live in NYC and one of the things I miss the most are XFF Liang Pi Cold Skin Noodles, so when Jason sent me this book I hoped to find the secrets that would allow me to replicate that haunting flavor here in the cold Pacific Northwest . . . and I'm happy to say that Jason has revealed all!"
--Andy Ricker "James Beard Award-winning chef and author of Pok Pok"

"With the publication of chef-restaurateur Jason Wang's cookbook Xi'an Famous Foods: The Cuisine of Western China, from New York's Favorite Noodle Shop, people all over the world can create their own versions of these assertively spiced (but not all that incendiary), soul-warming dishes. And as an added bonus, the book offers something that Wang's restaurants can't--an unflinchingly honest and heart-wrenching account of his family's unlikely path to restaurant success."
--Ed Levine "founder of Serious Eats and author of Serious Eater" --This text refers to the hardcover edition.

A collection of 100 recipes and stories from Xi'an Famous Foods, the iconic New York restaurant and mostwell-known purveyor of Western Chinese cuisine in America. --This text refers to the hardcover edition.

Jason Wang is the CEO and owner of Xi’an Famous Foods, which has 14 locations. Wang was named an Eater Young Gun, a Zagat 30 under 30, a Forbes 30 under 30, and Crain’s 40 under 40. --This text refers to the hardcover edition.
Read more

4.8 out of 5 stars
4.8 out of 5
672 global ratings
How are ratings calculated?
To calculate the overall star rating and percentage breakdown by star, we don’t use a simple average. Instead, our system considers things like how recent a review is and if the reviewer bought the item on Amazon. It also analyses reviews to verify trustworthiness.

Nicholas Constantine
2.0 out of 5 stars Recipes deliberately difficult?
Reviewed in the United Kingdom on 9 February 2021
Verified Purchase
I bought this book as a big fan of XFF and enthusiastic home cook of regional Chinese food. But unfortunately I found these recipes extremely hard - they feel almost written to stop you bothering rather than to encourage you. The author insists you cook everything in small batches, from scratch, with minimal substitutes, tells you that you will do a bad version, and still says these are simplified versions of the restaurant dishes. If XFF were a Michelin-starred restaurant, I would understand their reluctance to simplify things for the home cook. But as it this, I found this book a pleasant read but totally unusable for cooking.
Read more
One person found this helpful
Report abuse

Jan
5.0 out of 5 stars Delicious
Reviewed in Germany on 21 December 2020
Verified Purchase
I read about this long awaited book. I've never been to XFF actually. But the recipes and the book are fun to read and most importantly, delicious to eat. Xi'an dishes, but with an added western twitch. Veeeery nice.
Read more
One person found this helpful
Report abuse

SoCalGal
5.0 out of 5 stars Xi’a, an adventure in amazing food!
Reviewed in the United States on 16 October 2020
Verified Purchase
I received my cookbook today and spent a couple hours reading it. The cookbook exceeded my expectations, which includes family history as well as recipes that go beyond the Xi’an Famous Foods restaurants. I discovered Xi’an Famous Foods during my daughter’s Junior year at NYU. I was so upset it took her so long to discover it, it’s that good! I plan on starting with, and perfecting, a basic dish with Biang-Biang noodles. Next I’ll move on to XFF spicy and sour dumplings, a personal fav. Did you know it’s normal to freeze dumplings for future use?! Who knew, now I won’t feel like a shortcut cheat! There’s a recipe for “West Fu “Pretzels” “ They look so pretty and I can’t wait for an opportunity to surprise my young adult children with them! This cookbook will keep me busy for years!

UPDATE 10/28/2020: According to my daughter, the Biang-Biang noodles and Mt. Qi Vegetables tasted just like the restaurant (my first attempt she said I cut the vegetables too small, but my second attempt was just right). Tonight I made dumplings, dumpling skin dough and spinach dumpling filling, without the Sichuan peppercorns, because she doesn’t like spice. She said it was the best dumplings she’s ever had. For myself I made spinach dumpling skin dough with the pork and chives dumpling filling. I used the XFF dumpling sauce XFF chili oil for the dish I remembered at the restaurant.

Steven
5.0 out of 5 stars My new favorite cookbook
Reviewed in the United States on 31 October 2020
Verified Purchase
I mainly picked up this book because I have been a huge fan of the restaurant ever since a friend of mine who lived in Flushing told me about the opening of one of her favorite restaurants in the St Marks area of NYC that I used to frequent often back then. When Xian Famous Foods opened in the LES (Lower East Side for the unfamiliar), I had recently returned from my first trip to the Eastern Hemisphere to visit a friend who worked for the US Embassy in China. I spent a few months traveling to various places there and loved it (including Xi'an, but just briefly to see the Terra Cotta Soldiers). I was initially attracted to XFF in NYC by the very cheap prices for a filling, unique, and delicious meal (I think the lamb burger was only $2? Try finding prices like those in NYC!) but after a while I found myself having cravings and making the trek over to the LES for some good noodles in soup or a quick bite of the burgers.

Due to events of 2020 XFF has been (mostly) closed in NYC at the moment and when I heard about this book I wanted to try to see if I can get my XFF cravings satisfied at home. I was pleasantly surprised by this book! Originally I was expecting more of a cookbook for some of the dishes at one of my more favorite "fast casual" restaurants in NYC (which it is!), but this book is so much more, for me it was also a coming-of-age slash rags-to-riches story, a nice nostalgia trip (I have a lot of Asian friends in NYC, so I have also had some Circle/KTown nights that Jason describes at one point), and an appreciative retrospection for Jason, all while making my mouth water the whole entire time.

One thing I love about this book as a cookbook is the simplified list of ingredients -- most cookbooks require a large array of ingredients to craft the recipes at home on your own, which becomes even more of a problem when the recipes require ingredients that are quickly perishable. I feel like there are a small subset of ingredients required that are constantly used throughout the recipes in this book, if you are fortunate enough to live near an Asian market you can get started on many of the recipes right away in a short amount of time. It also really shows you the versatility of the ingredients, with some creativity you can use some of the sauces and spices to make a "XFF-style" dish of your own.

Do yourself a favor and grab a copy of this book for your shelf and try out some of the recipes! If you are intimidated by some of the steps, like noodle-pulling to be specific, take a look around the internet for some videos to help supplement the book, once you see the process it becomes a lot less intimidating
Read more
30 people found this helpful
Report abuse
See all reviews
Back to top
Get to Know Us
Make Money with Us
Let Us Help You
And don't forget:
© 1996-2021, Amazon.com, Inc. or its affiliates