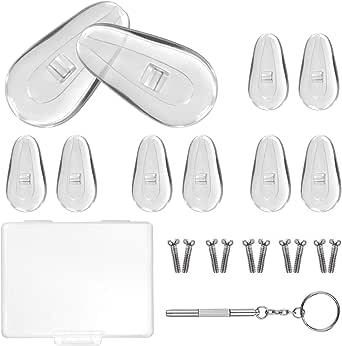 4.2 out of 5 stars 2,966 ratings
Secure transaction
Returns Policy
Your transaction is secure
We work hard to protect your security and privacy. Our payment security system encrypts your information during transmission. We don’t share your credit card details with third-party sellers, and we don’t sell your information to others. Learn more
Available from these sellers.
Share

Specification: Size(Nose Pad): 15mm x 8mm. Thickness(Nose Pad): 2mm Size(Micro Screwdriver): 55mm x 4mm x 4mm Size(Tiny Screw): 4mm length Material: Silicone, Stainless steel Color(Nose Pad): Clear Package Contents: 10 x Nose Pads, 10 x Tiny Screws, 1 x Micro Screwdriver. Applicable people: Adults and Child About The Product: There is a small hole at the bottom of each silicone nose pad, that is for reducing the pressure caused by the frame and protecting your nose bridge. The Mini Scrwdriver: 3 in 1 design, includes the Flat-head screwdriver, Phillips-head screwdriver, and nut driver. Alsowith a keyring, you can attach it to your keys, bags, and so on, so that you can use it at any time you need.   Warming Tips: This product contains small parts, please keep away from babies and small children.

4.2 out of 5 stars
4.2 out of 5
2,966 global ratings
How are ratings calculated?
To calculate the overall star rating and percentage breakdown by star, we don’t use a simple average. Instead, our system considers things like how recent a review is and if the reviewer bought the item on Amazon. It also analyses reviews to verify trustworthiness.

Andrew
5.0 out of 5 stars Oh my
Reviewed in Australia on 16 October 2020
Verified Purchase
They are the most comfortable nose pads for glasses I have ever worn. More grip too. I went for a jog forgetting to take out my glasses and well do they stay.
Read more
Helpful
Report abuse
See all reviews

Dennis M. Wierzbicki
5.0 out of 5 stars Worked great. Fast delivery. I'm a fan
Reviewed in the United States on 25 March 2019
Verified Purchase
My glasses still work, however one of my nose pads had fallen off, and I had super-glued it on so many time that the holes in the nose pad mount were full of dried glue. The last time, the pad fell off, and disappeared. So, I figured I was headed to the eye doctor for a new set of glasses. Feeling I had nothing to lose, I attacked my glasses with a low speed drill and small bit, and voila, was able to dig out all of the dried glue.
I ordered these nose pads, and installed one on the broken side. Went in very easily and works exceedingly well. To balance things out, I replaced the other, "good", pad.
I'm a fan! I'll be able to get a few more years of use from my old glasses (my script hasn't changed - just got it checked last year).

Jodi Dibble
5.0 out of 5 stars Great improvement from plastic "pads"!
Reviewed in the United States on 24 February 2019
Verified Purchase
First, the pads themselves are nice and soft. This is a great improvement over the plastic pads that had come with my glasses. And, of course, they "stick" a lot better than the slick plastic pads do, so hopefully I won't find myself constantly pushing these glasses back up my nose as I had needed to.

Installation was not exactly easy, but that's not this product's fault. The screws here are, as you would expect, tiny. That said, while the screws in my glasses were "flat head" screws, the provided screws were "Philips head", which is *much* easier to deal with since the screwdriver isn't constantly slipping off the head. So, it took a lot more time and frustration trying to get the old screws out than getting the new ones in. Of course, not having my glasses on at the time didn't help!

Unlike some other reviewers, I don't have a problem with the pads "flopping around". My glass frames have a little enclosure that the "tab" goes in then screws down, so there's only a few degrees of movement with the pads. Of course, they are soft so you'll see them deform a little if you force them to slide down your nose, but putting glasses on and taking off "normally" doesn't cause any issues that I can see. That said, I've only had these for an hour, so if anything changes I'll update this review to note it.

Overall, a nice little package, and as pain-free as possible process to do the replacement.
Read more
45 people found this helpful
Report abuse

Molliekeeper
5.0 out of 5 stars Very soft+ TIP
Reviewed in the United States on 16 March 2019
Verified Purchase
I like that I recieved them right away. I have replaced nose pads previously. I am naturaly mechanicly inclined and ambiodecteous. This was fairly easy for me to install. tey feel so soft make a real differance. I noticed some people were bothered by the woble. I find this a plus as it alows the pads to adjut to the contours of my nose. I have 2 pair of glasses so I could see what I was doing. If you don't have a 2nd pair either get some one to hold a magnfiying glass or get a cheap pair of readers at the dollar store. TIP TO PROTECT YOUR LENS FROM SCREW DRIVER SLIPING TAPE SOMTHING (I used a pice of the packing envelope)OVER THE LENS SO YOU DON'T SCRATCH IT.
Read more
43 people found this helpful
Report abuse

jen
5.0 out of 5 stars pillows on my nose
Reviewed in the United States on 6 February 2019
Verified Purchase
These things are heaven! I also bought another brand that are "gel cushioned" and they don't even compare to these. Not only did the little screwdriver "kit" come in handy, but boy are these things soft and comfy. Very happy with this purchase!
Read more
27 people found this helpful
Report abuse

Tekrad
5.0 out of 5 stars Great Comfort - Great Replacement For Smelly/Hard Original Pads
Reviewed in the United States on 10 March 2019
Verified Purchase
I purchased reading glasses from America's Best for a great price - except the nose pads were made from such a cheap, smelly plastic, that I couldn't stand to have them near my nose. Who knows what the chemical leeching might have done to my nose long term.
This pad replacement kit was just the remedy for the smelly pads and a remedy for heavy glass lens wearing people like me.
Great Product!
Read more
12 people found this helpful
Report abuse
See all reviews

Page 1 of 1 Start overPage 1 of 1
Previous page
Next page
Get FREE delivery with Amazon Prime
Prime members enjoy FREE Delivery and exclusive access to movies, TV shows, music, Kindle e-books, Twitch Prime, and more.
> Get Started
Back to top
Get to Know Us
Make Money with Us
Let Us Help You
And don't forget:
© 1996-2020, Amazon.com, Inc. or its affiliates