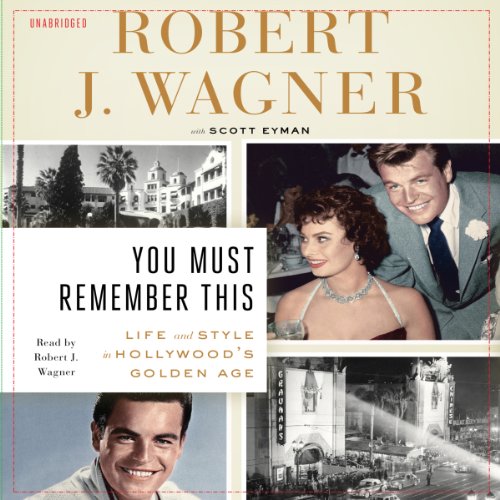 You Must Remember This: Life and Style in Hollywood's Golden Age

A New York Times best seller and a “charming tribute” (Kirkus) to Hollywood’s most beloved era film and television star Robert Wagner has been delighting audiences for more than 60 years, and his many fans flocked to bookstores when he began to record his memories on the page. In his second New York Times best seller, Wagner shares stories of Hollywood life behind the scenes from the 1930s through the 1950s. As poignant as it is revealing - and filled with magical moments like Judy Garland singing Gershwin at a dinner party thrown by Clifton Webb and golf games with Fred Astaire - You Must Remember This is Wagner’s tender farewell to a legendary era.

4.1 out of 5 stars
4.1 out of 5
367 global ratings
How are ratings calculated?
To calculate the overall star rating and percentage breakdown by star, we don’t use a simple average. Instead, our system considers things like how recent a review is and if the reviewer bought the item on Amazon. It also analyses reviews to verify trustworthiness.

lindsay devereux
5.0 out of 5 stars Hollywood's Golden Age, for all
Reviewed in Australia on 27 March 2014
Verified Purchase
Excellent, trip down memory lane , to afar far better place and golden time.
For all of us who love nostalgia and for those who care enough to remember.
Well done R.J.
Read more
Helpful
Report abuse

HylaryK
5.0 out of 5 stars A personal memoir, fascinating insight.
Reviewed in the United Kingdom on 12 May 2015
Verified Purchase
I found this much more interesting than I expected - fascinating to chart the development of South California from orange groves to film industry to TV. Robert Wagner's take on architecture, fine dining, tailoring, stardom - thoughtful, polite and generous. I bought the kindle version with the author's narration included, which added to the experience. It is a definite sequel to 'Pieces of My Heart''. I enjoyed both.
Read more
One person found this helpful
Report abuse

sharon louise
5.0 out of 5 stars Brilliant book
Reviewed in the United Kingdom on 26 February 2021
Verified Purchase
Great book. Makes you wish for days gone. Must have read for those interested in old hollywood.
Read more
Report abuse

E. WATERS
5.0 out of 5 stars Another Good Read
Reviewed in the United Kingdom on 6 June 2014
Verified Purchase
This is the second book I have read of Robert Wagners. I thoroughly enjoyed it. It takes you back in time to what Hollywood was like a long time ago. I love reading about the stars of yesteryear, the places they went to,the naughty things they got up to, it wasnt in your face like they are today. Todays stars could learn a lot from the stars gone by. Thank you Robert for another good read.
Read more
5 people found this helpful
Report abuse

Amazon Customer
3.0 out of 5 stars OK book.
Reviewed in the United Kingdom on 24 August 2019
Verified Purchase
OK.....not a riveting read but fairly interesting all the same.
Read more
Report abuse

Hcopter
4.0 out of 5 stars Four Stars
Reviewed in the United Kingdom on 18 November 2018
Verified Purchase
Good size large print so hopefully my father will be able to read it ok.
Read more
Report abuse
See all reviews