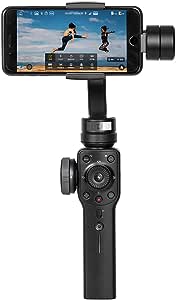 Zhiyun Smooth 4 turns your mobile phone into a professional filmmaking camera, helping you create stable and smooth footage with just your phone. The design of integrated control panel can reduce the need to touch the screen, and help users control both the stabilizer and mobile camera directly with hot-key buttons.

Smooth 4 can run for 12 hours in a row. The battery indicator tells you how much power is left. The stabilizer can charge your phone directly during shooting. You can shoot video all day long with no need to worry about the battery. It adopts the mainstream Type-C charging port so that users can use both ends of the cable for charging. The stabilizer can be charged by portable power source and the phone can be charged by the stabilizer via USB port on tilt axis. The two-way charging can happen at the same time, guaranteeing the longest operation time possible.

Smooth 4 is designed with a slider on its control panel and a trigger button on its back, to easily recognize and switch between different gimbal modes.

4.2 out of 5 stars
4.2 out of 5
253 global ratings
How are ratings calculated?
To calculate the overall star rating and percentage breakdown by star, we don’t use a simple average. Instead, our system considers things like how recent a review is and if the reviewer bought the item on Amazon. It also analyses reviews to verify trustworthiness.

El Gheib
4.0 out of 5 stars Overall good buy
Reviewed in Australia on 25 April 2019
Size: BlackVerified Purchase
I've been using this gimbal for a few weeks. Generally recommended.
Things to know: the Zhiyun app is very buggy and unreliable, but necessary if you want to do timelapse and vertigo and other features. It works and has got lots of good features, but every other time I open it, the interface for a different Zhiyun shows up and only part of the features are available. It seems like it's suffering from random bugs and general user-side inconsistencies. The Share function, for instance, shows a row of buttons without legends, and most of them are Chinese networks like WeChat that I don't use; the Facebook export doesn't work for me, just sending me to an unauthorised Web error. However, FiLMiC Pro (a $25 app, very powerful) supports the device's most video features, so there's no need to tap the phone screen too much when using FiLMiC. If you want to take vertical Instagram Stories videos, it's possible in both apps, but you need to turn the gimbal off and unscrew and turn and screw in again. So it's not easy to switch orientations on the fly like at least one other gimbal I've heard of. Also, you can't film direct to Instagram since you need to keep your finger on the record button on-screen, so to take advantage of the hardware buttons you have to film in FiLMiC or Zhiyun's app and then transfer to Instagram somehow (seems like InShot is a good choice). So those are the software-based limitations. On the hardware side it's rather good—I love hardware buttons and the less I have to tap the screen the happier I am. Smoothly zooming with the side wheel (the cheapest looking part of the device, btw, but still seems solid enough) and changing exposure with the other wheel is so much better than messing around on an iPhone screen. The Smooth 4 feels solid and good quality in general. The screw-on tripod works well. The battery is huge, only requiring recharging after lots of use. I bought a tiny USB cable (not included!) to charge the phone while using it (shooting 4K video on my iPhone 7 drains the battery fast) so the gimbal replaces an external battery and a tripod as well as the stabilisation features. The smoothness is really good for panning and walking (I'm still perfecting the "ninja" walk so footage doesn't bob up and down, however smoothly) so with some practice the results look like they were shot on wheels. The in-camera software stabilisation (at least in my case) needs to be left on (in FiLMiC Pro; I think it's always on in the Zhiyun app). Sometimes the motors panic and try to go too far resulting in an alarming shake; usually this occurs when I'm in Lock mode and go too far in the wrong direction. No big deal. When double-hitting the Following Mode Button (bottom one on the "other" side) the motors reset to centre (tilt and roll) but I wish it did it a bit faster and/or smoothly. It always starts by gliding for a second and then abruptly shifting into place; this feels like an error that could be fixed in future Firmware updates, but maybe it's a necessary feature that I don't understand. What else… This device doesn't have an Inception mode like another new gimbal out there.
To conclude, I'm satisfied for my tinkering because the price was good; I haven't tried any other gimbals but from what I've seen on YouTube there are quite a few good ones (i.e DJI Osmo, more expensive in Australia, and the new Mini something which is foldable, has Inception mode, can switch orientation on the fly, and is actually cheaper in the US but maybe not available in Australia yet). There are lots of little annoyances I tried to list here but honestly, for the price, it's worth it. Like with any tool, I need to find the best way to get it to work for me; I'm still searching.

Yalcin Yilmaz
3.0 out of 5 stars Always losing horizontal calibration.
Reviewed in Australia on 14 October 2020
Verified Purchase
Works well, but it's always 1-2 degrees off-horizontal. Photographers and videographers know how important it is to get the horizontal angle right. I need to calibrate over and over again. Very annoying. Check online forums; seems to be a common issue. Otherwise great unit, excellent steadiness.
Read more
Helpful
Report abuse

Tulio Lima
3.0 out of 5 stars Good but not great.
Reviewed in Australia on 17 August 2020
Verified Purchase
Gimbal works as any other normal gimbal. I use Android Samsung S8 and other functions such as vertigo, panorama and etc do not work with it. You receive a note inside the box regarding compatibility problems with Android phones, but thats already too late.
I wish that was a better explanation on the page regarding this issue.
Apart from that the gimbal will do everything expect from a gimbal. Smooth footage and fast track mode.

Nishanth Panati
5.0 out of 5 stars Perfect for Andriod
Reviewed in Australia on 28 June 2019
Verified Purchase
Arrived on time. Has a good stability control and is even capable to take load above its rated limit. Works well with android also, I didn't face any connectivity issues as mentioned in few comments and reviews. Package included a perfect holder attachment for my go pro.
Read more
Helpful
Report abuse

Geoffrey R. Folland
5.0 out of 5 stars As expected
Reviewed in Australia on 10 June 2019
Verified Purchase
I did research before buying this product. It arrived in a timely manner. And it is a little complicated to learn how to use (watched a couple of tutorial videos). But it feels really good quality. I'm looking forward to putting it to good use.
Read more
Helpful
Report abuse

John Williams
5.0 out of 5 stars Easy setup
Reviewed in Australia on 8 September 2020
Verified Purchase
What a fantastic product! Is was very easy to set up, and as a beginner, I am still learning how to take full advantage of all the features, but there are plenty of YouTube videos and tutorials that show you how to use it. My wife loves it and its a battle to see who will use it
Read more
Helpful
Report abuse

Tony Vowles
5.0 out of 5 stars Great product
Reviewed in Australia on 30 January 2021
Verified Purchase
I am liking the Zhiyun Smooth 4. Its the first stabilizer I have bought and need to watch a few YouTube videos to work out how to use everything but super happy with the build quality and the price.
Read more
Helpful
Report abuse

Read more
5 people found this helpful
Report abuse
Translate review to English
See all reviews
Pages with related products. See and discover other items: Best Rated in Camcorder Stabilizers & Supports
Back to top
Get to Know Us
Make Money with Us
Let Us Help You
And don't forget:
© 1996-2021, Amazon.com, Inc. or its affiliates