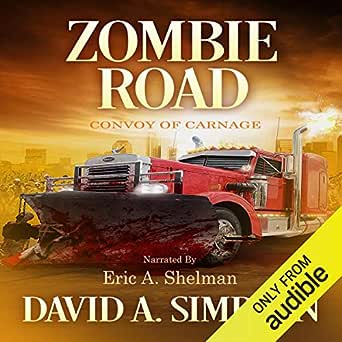 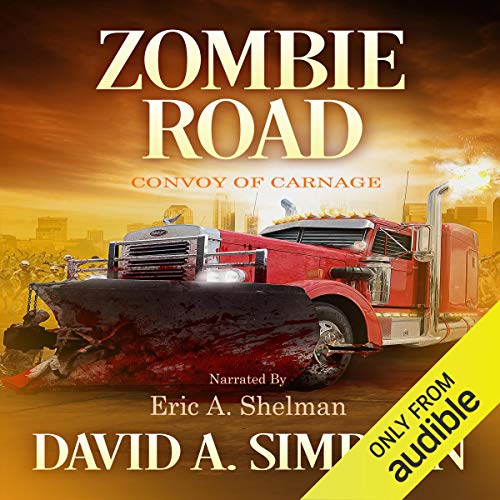 4.7 out of 5 stars
4.7 out of 5
293 global ratings
How are ratings calculated?
To calculate the overall star rating and percentage breakdown by star, we don’t use a simple average. Instead, our system considers things like how recent a review is and if the reviewer bought the item on Amazon. It also analyses reviews to verify trustworthiness.

Kay Mack
TOP 500 REVIEWER
5.0 out of 5 stars Great Adventure!
Reviewed in Australia on 14 May 2019
Verified Purchase
This story is character deep, very rich and at times powerful. But there are laughs too. There are three main groups of survivors, all connected through Gunny. He and many of the truckers are ex-servicemen, luckily all at their favourite truck stop when the zombies hit town. The novel was so good, I’m tempted to read it again! Is there a second book? That would be a must have. Mr Simpson this was a ripper!!!!
Read more
Helpful
Report abuse

Bryan Griffith.
5.0 out of 5 stars Zombies with truckers!
Reviewed in Australia on 30 July 2019
Verified Purchase
A great twist on the on going zombie stories, yes truckers but very believable characters so read about the good the bad and the zombies!
Read more
Helpful
Report abuse

Amazon Customer
4.0 out of 5 stars Truckies versus Zombies
Reviewed in Australia on 27 November 2018
Verified Purchase
A Zombie book with an unlikely but loveable cast who you just want to keep barracking for. Looking forward to the next book
Read more
Helpful
Report abuse

Mel
5.0 out of 5 stars Gripping from start to finish
Reviewed in Australia on 19 September 2018
Verified Purchase
This was a fast paced, action filled, brilliantly written story. I thoroughly enjoyed every minute of it and I’m just off to get the next book in the series.
Read more
Helpful
Report abuse

Jim Goforth
5.0 out of 5 stars Exemplary foray into undead realms
Reviewed in Australia on 9 June 2017
Ever since television shows like The Walking Dead brought zombies into the mainstream, the undead have been a mainstay in fiction. Granted, they were around well before then, but never has there been such a saturation of zombies, and zombie-themed works cropping up all over the place. Some trends seem to ebb and flow, or die away, but it is testament to the popularity of zombies as a subject, that explorations into undead realms just keep on keeping on.
Naturally, with so many zombie related books being churned out in mass proliferation, there are true gems, there are terrible ones, and there are those which, while well-written tread the same well-worn path and present nothing new. Then, there are those which manage to find a truly unique way to present the subject.
David A. Simpson’s ‘Zombie Road: Convoy of Carnage’ is one of those that slots nicely into that final category.
When there are so many spins out there on the good old zombie formula, that it is increasingly harder to maintain a fresh approach or conjure up something new, Simpson has done remarkably well with this balls to the wall, fast-paced, action-packed foray into the undead.
Zombie Road revolves around a collective of assorted miscreants including random truck drivers, college students and several other survivors of a zombie outbreak, where a virus has been released and infected a vast amount of the population at the same time. These souls, frequenting the Three Flags Truck Stop out in the desert areas of Reno, aren’t at first even aware that the zombie apocalypse has descended upon the world, but soon enough they make that horrifying discovery.
Now it’s up to long haul trucker, Gunny, to ferry this bunch of intriguing characters to sanctuary, before he can concentrate on his own mission to rescue his own family.
Simpson’s prose is fast and furious, well-written, with solidly developed and well-realised characters, and a main man who isn’t just a cardboard cut-out cliché of many of those so-called heroes who populate zombie apocalypse fiction. The pacing is exemplary, there are some brilliant moments of dialogue and character interplay, and the extreme zombie despatching when it kicks off, is done so with gleeful splatter in abundance, and violence notched up to incredible levels.
Do yourself a favour and check this one out, whether you’re a zombie aficionado or otherwise. There’s a whole lot more to Zombie Road: Convoy of Carnage than just another undead apocalypse tale.
Read more
3 people found this helpful
Helpful
Report abuse

Kindle Customer
1.0 out of 5 stars Islamophobic book.
Reviewed in Australia on 14 December 2018
I would accept the story line if it was about some radical group of terrorists claiming to act in the name of Islam, but it's not. This book condemns ordinary american muslims as part of their evil plan.

You say a review can make or break an indie author.

I hope this makes you see that this kind of stereotype does not help in promoting peace in the world.

Terrorist groups are as Islamic as the KKK is Christian.
Read more
One person found this helpful
Helpful
Report abuse

Chicks that kick
5.0 out of 5 stars An immediate must have
Reviewed in Australia on 1 May 2019
Started reading this series thinking it probably was ok. But having started it, could not put it down, then finished the next 4 straight after each other. Amazing characters, great story & a very thought provoking take on the zombie apocalypse genre
Read more
Helpful
Report abuse
See all reviews

MarcCarno
1.0 out of 5 stars Unfunny exploitation of modern bias + absurd premise
Reviewed in the United Kingdom on 18 March 2019
Verified Purchase
I never give away plots. I don’t do spoilers. I’m about to break that rule.

The story premise “global Muslim plot kept utterly secret which involves all ‘Muslim’ countries and buying up all meat distribution companies”. With a dose of ‘globally synchronised release of poisoned meat with some form of zombie-inducing nano-virus’ and layered with ‘mosques worldwide prepared to hide local Muslims from the Zombie pandemic.

It’s awful. It’s simplistic nonsense that exploits prejudice against Muslims and exposes a scary level of ignorance about the world - globally coordinated meat distribution? Really? Buying all this stuff with oil money? Really? Do the authors not know about little things such as the Sunni/Shia divide? Or what about the 600million or so vegetarians in India? Ok I’m being somewhat facetious with the last comment but, really?

Just about every modern misconception and bias gets crammed in here. Apparently, if you went to College you certainly know nothing about ‘the real world’ (for example).

I’m expecting that later in the series someone exposes the moon-landings ‘for the lie they are’ (sic). Except I won’t be reading any more of this. I’m actually quite disgusted a novel can be made on the premise of religious divide in this manner.

The book style is written clearly. The authors clearly have experience there. I’m frankly astounded at the number of positive reviews for this book. I will *never* buy another in this series - if the authors intended to expose some enormous ironic twist in book 2 then it’s too late for me.
Read more
3 people found this helpful
Report abuse

Hank
3.0 out of 5 stars Three stars says it
Reviewed in the United Kingdom on 16 July 2017
Verified Purchase
I'm going to break the mould but when I read a zombie novel I judge how much I'm enjoying it by the time factor between reads. With this book I never had the urge to get back when I had time to spare. There were a lot of names and nicknames to remember although I liked the characters that were developing but at the same time I didn't enjoy the political overtones. I'm not one for over described gore and I can't fault the author on that score. Perhaps for me there were too many characters. I admit I have put the book down and I will return sometime in the future or it could be I'm getting over saturated with the Zombie genre which is a possibility. I like my zombies to be a slow moving menace not creatures who are trying to steal the crown of Mr Usain Bolt
Read more
5 people found this helpful
Report abuse

Owen
5.0 out of 5 stars The zombie apocalypse is very much like Modern Jazz
Reviewed in the United Kingdom on 12 October 2017
Verified Purchase
Who would have thought a bunch of embittered, ex-military, trucking rednecks would find all their Christmases have come at once in the zombie apocalypse – well they do. If you’ve ever wondered what would happen if zombies were pitted against semis, trains, bulldozers, in fact a frightening array of heavy plant, then this is the book for you. The problem with this genre is that it is rather one dimensional; it has a lot in common with Modern Jazz i.e. you know what’s going to happen, it’s just a case of how gruesome it gets - and in this book it gets very gruesome indeed… and no one seems to worry about the smell. However, notwithstanding the stereotypical zombies, the gore and the racism it’s still a jolly read
Read more
One person found this helpful
Report abuse

Rob73
5.0 out of 5 stars Brilliant
Reviewed in the United Kingdom on 22 December 2017
Verified Purchase
Do you think guns are bad?

Do you think the military is bad?

Have you ever used the phrase “toxic masculinity”?

If you answered yes to any of these questions, this series is not for you. Go read Harry Potter or something.

Still here? Then you’ll LOVE this series. Pure gun-toting, Military-focused action from the get-go. A believable premise for the Zompoc, and a protagonist trying to get to his family who gets side-tracked with a very strange job offer.

David Simpson knocked it out of the park with this one. Can’t wait for more.
Read more
One person found this helpful
Report abuse

H R Danposh
5.0 out of 5 stars Love the zombie genre but recent books have been very ...
Reviewed in the United Kingdom on 11 July 2017
Verified Purchase
Wow! Downloaded the first two books in this series and read them back to back. Just finished the second and am still on an adrenaline high!
Love the zombie genre but recent books have been very samey however this author has great characters and a superb writing style - the pace is fast,furious,serious and comical all on the same page.
If the worst happens I want to be in a truck stop with ex-military truckers!
Also adore the reason for the outbreak - very novel - no spoilers here!
Cannot wait for the next and the next and the next ..............
Read more
2 people found this helpful
Report abuse
See all reviews
Back to top
Get to Know Us
Make Money with Us
Let Us Help You
And don't forget:
© 1996-2021, Amazon.com, Inc. or its affiliates