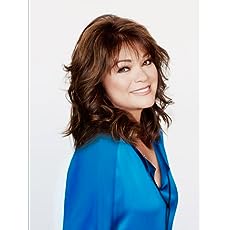 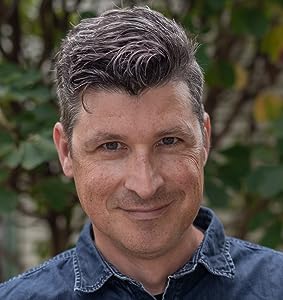 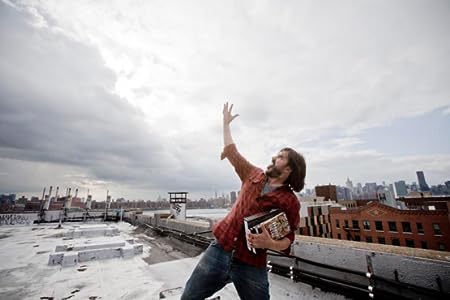 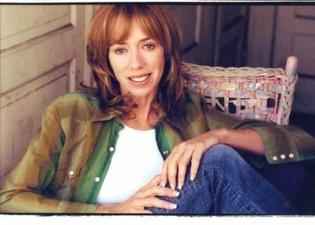 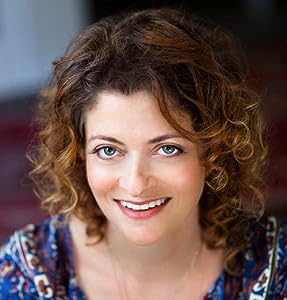 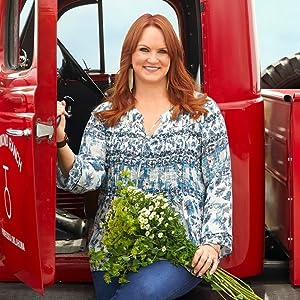 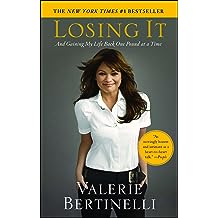 Losing It: And Gaining My Life Back One Pound at a Time 25/02/2008
by Valerie Bertinelli
( 404 )
$14.99
Valerie Bertinelli, then: bubbly sitcom star and America's Sweetheart turned tabloid headline and rock star wife. Now: actress, single working mother of teenage rock star, and weight-loss inspiration to millions.

We all knew and loved Valerie Bertinelli years ago when she played girl-next-door cutie Barbara Cooper in the hit TV show One Day at a Time, and then starred in numerous TV movies. From wholesome primetime in America's living rooms, Valerie moved to late nights with the hardest-partying band of the decadent eighties when she became, at twenty, wife to rock guitarist Eddie Van Halen. Losing It is Valerie's frank account of her life backstage and in the spotlight. Here are the ups and downs of teen stardom, of her complicated marriage to a brilliant, tormented musical genius, and of her very public struggle with her weight.

Surprising, uplifting, and empowering, Losing It takes you behind the scenes of Valerie's acting career and marriage, recalling the comforts, friendships, and problems of her television family, her close relationships with her parents and brothers, the stress and worries of being the wife of a rock star, and the joys of motherhood. Like many women, Valerie often remembers the state of her life by the food she ate and the numbers on her scale. So despite her celebrity, Valerie's voice is so down-to-earth, honest, and appealing that you'll feel as if you're talking with a girlfriend over coffee. Funny and candid, Valerie recounts her attempts to maintain a healthy self-image while dealing with social pressures to look and act a certain way, and to overcome career insecurities and relationship problems, all of which will be familiar to the hundreds of thousands of women who struggle every day with these same issues.

From marital turmoil to the joys of a new career, from being named among Penthouse's ten sexiest women in the world to overhearing whispers about her weight gain in the grocery store, this is Valerie's inspiring journey as she finds new love, raises a terrific kid, and motivates other women as a spokesperson for Jenny Craig.
Read more
Other Formats:: Audible Audiobook , Hardcover , Paperback , Audio CD
includes tax, if applicable 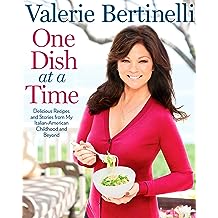 One Dish at a Time: Delicious Recipes and Stories from My Italian-American Childhood and Beyond : A Cookbook 16/10/2012
by Valerie Bertinelli
( 334 )
$7.99
More than 100 recipes for the Italian dishes of the much-beloved celeb's childhood, presented with tips and hints for enjoying them without overindulging.

As a member of a large, food-loving Italian family, Valerie Bertinelli has always equated food with good times and togetherness. But at one point her love of food threatened not only her health, but her livelihood as an actress, when personal demons drove her to overeat and make poor food choices that caused her weight to balloon by 50 pounds. Now happily svelte, remarried, and riding a new career high, Valerie has made peace with food, giving it a central—yet considered—place in her home and family celebrations.

One Dish at a Time offers an intimate look into the beloved actress's kitchen, where she prepares a collection of treasured recipes from her Italian heritage. Along the way, she shares her insights into the portion control and mindful indulgence she has come to practice on her journey to enjoying the pleasures of the table again.

Filled with gorgeous photos including the actress in her kitchen, nutrition information accompanying each recipe, and Valerie's tips for maintaining a healthy lifestyle, One Dish at a Time is designed to please baby boomer fans and home cooks alike.
Read more
Other Formats:: Hardcover
includes tax, if applicable 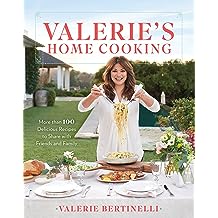 Valerie's Home Cooking: More than 100 Delicious Recipes to Share with Friends and Family 10/10/2017
by Valerie Bertinelli
( 699 )
$21.41
As the current star of her Food Network show, Valerie's Home Cooking, and co-host of the network's Kids Baking Championship, as well as having spent years acting on television, Valerie Bertinelli has made a name for herself in households across America. But to really know Valerie, is to spend time in her kitchen.
Inspired by her family's cooking legacy, Valerie specializes in showing fans how to make dishes their own families will love that are for the heart and soul. As she often says, there's a story behind every recipe and Valerie shares them in this gorgeous cookbook, where home cooks will find more than 100 recipes that are easy to make and innovative--they're just as fresh, vibrant and down to earth as Valerie herself. Many of these classic comforting recipes have an original twist like Bloody Mary Tea Sandwiches, Lobster BLTs, Quick Rotisserie Chicken Gumbo, and S'mores Popcorn. These mouthwatering dishes will become your go-tos, whether you're having breakfast or lunch on your own, friends are joining for last-minute cocktails and small bites, or the whole family is coming together for a hearty dinner and dessert.
Read more
Other Formats:: Hardcover
includes tax, if applicable 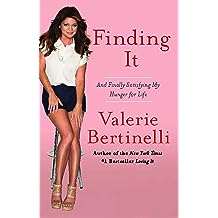 Finding It: And Satisfying My Hunger for Life without Opening the Fridge 26/09/2009
by Valerie Bertinelli
( 118 )
$11.99
Welcome back to chez Bertinelli, where life is as crazy and comical as ever. In revealing talks with her longtime boyfriend, Tom, Valerie gets even more personal about her inner worries: her maternal anxieties about her son, Wolfie (he's fallen in love and, as she writes, "getting your sex talk from Eddie Van Halen wasn't recommended in any of the parenting books I read"); the challenges of dealing with a blended family; her mother's own new diet adventure; and a craving for a deeper relationship with a Higher Power ("I have experienced days of inner peace and connectedness with a larger spirit -- twice," she writes. "Why not more often?"). And as if these everyday challenges weren't enough, Valerie is work-ing to maintain her own very public weight loss. She even gets to thinking she might kick it up a notch, shed more weight and get so buff she can wear a bikini -- in public.

In this new, inspiring memoir from the beloved actress and author of the bestseller Losing It, Valerie tells the story of what happens after you change your life. It's not all peaches and cream, or even non-fat yogurt.

In Finding It, Valerie comes face-to-face with hard questions of family, faith, and beachwear, and realizes that she's hungering for another transfor-mation -- to become better, not just thinner. Forget the scale; the real change is happening inside, and Valerie realizes that this is the part of dieting that no one ever talks about -- the reality of keeping the pounds off. Dieting fixes one problem, she discovers, but to maintain that weight loss, she has to work on everything else -- all the reasons she got fat in the first place.Warm and friendly, honest and self-aware -- like a talk with your BFF -- Finding It tells of the common worries and frustrations, the funny and fabulous moments in Valerie's publicly private life. Humorous and humble, it is also the emotional story of family and the deep bonds and patterns that persist through generations: for as Valerie transitions to her latest role of motherhood with an increasingly independent son, she connects with her own mother in a profound new way.

With the same winning wit and candor that touched several generations of fans in Losing It, Finding It is an optimistic story for trying times. It's about believing in love and happiness, having faith that both are possible, and finding out that God does want you to enjoy life's desserts -- even when you're on a diet.
Read more
Other Formats:: Hardcover , Paperback , Audio CD
includes tax, if applicable 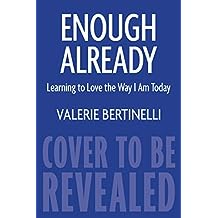 Enough Already: Learning to Love the Way I Am Today 18/01/2022
by Valerie Bertinelli
$26.94
Beloved actress and New York Times best-selling author Valerie Bertinelli returns with a heartfelt look at turning sixty, the futility of finding happiness in numbers on a scale, learning to love herself the way she is today, and tips for a healthier outlook on life.

Valerie Bertinelli shares an inspiring blueprint that offers women in midlife support and hope. She shares personal stories that many women will relate to from her past decade: hitting her fifties, taking care of her dying mother, the evolving relationship with her husband, a career change, her relationship with food, and the battle to believe in herself as she is.

Despite her success receiving Emmys for her Food Network show and critical praise for her books and cookbook, Bertinelli still judged herself harshly if she gained a pound or showed too many wrinkles. But after her mother died, she found an old recipe box with notes of the strong women that came before her, reminding her that she has to find out who she is and take care of herself. Saying, “enough already!” Bertinelli set out on a journey to love herself and see that perfection is not the goal; it’s the joy we can find every day in our lives, our loved ones, and the food we share. Recipes and advice will be sprinkled throughout the book.
Read more
includes tax, if applicable
Back to top
Get to Know Us
Make Money with Us
Let Us Help You
And don't forget:
© 1996-2021, Amazon.com, Inc. or its affiliates