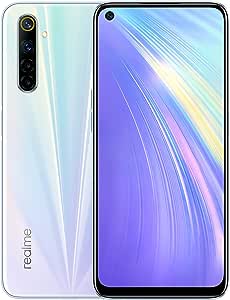 Built for gaming the realme 6 powerful processor that is designed for an excellent mobile game and viewing experience, along with its 90Hz super smooth screen, you won’t want to put your phone down! Its smart side fingerprint scanner ensures a fast and secure unlock. You can fully charge your realme 6 in just 1 hour with the 30W flash charge, so you no longer have to worry about a low battery. Featuring a 64MP AI quad camera with ultra-wide angle 119° zoom, you can achieve your best selfie moment yet using the AI beauty features! Includes a 2 Year Warranty and frequent security updates. Available exclusively from Amazon in Comet White or Comet Blue.

4.6 out of 5 stars
4.6 out of 5
80 global ratings
How are ratings calculated?
To calculate the overall star rating and percentage breakdown by star, we don’t use a simple average. Instead, our system considers things like how recent a review is and if the reviewer bought the item on Amazon. It also analyses reviews to verify trustworthiness.

Hawkins
5.0 out of 5 stars Speechless
Reviewed in the United Kingdom on 25 April 2020
Colour: Comet WhiteSize: realme 6 64GBVerified Purchase
Really impressed with this phone, bought due to boredom in isolation and didn't expect much, just wanted to see a 90hz display and have a play around. But wow, what an amazing phone for the price, current phone is a S10 and I kid you not, I can not tell the difference between the two in terms of speed when loading apps etc, and the 90hz display is just amazing, at first you don't notice it, but once you have a days use and switch back to a 60hz display it really stands out!

I have ran a battery test, the phone was discharging from 9am and needed charging by 11pm, this was with 7 hours screen on time which consisted of Reddit, maps, YouTube and using the camera with the screen set to 90hz and half brightness. Very impressed.

The camera is a weak point on this phone, coming from the S10, it is noticeable but when tuned right it can produce decent pictures however to achieve this requires a lot of patience on every shot and is just not feasible.

Screen quality is pretty standard for a 1080p panel, it doesn't stand out from other screens in terms of image sharpnes etc. Brightness is low on the phone, however not enough to be disappointed in, it just stands out against a flagship phone. As stated 90hz is really good on the phone, it's not just a gimmick, it makes the phone feel way smother and snappier, from this point out I can't see myself buying anything else.

I ordered the 4 gig version of the phone, for 220 this is a steal. I have not needed any more ram, the phone evens out at around 3.8, tho this is close, I'm not worried about it, I'd recommend the 4g version for the price.

So I bought this phone to just see what sort of phone you could get for 200£, I have now found my daily phone and will be selling my S10, yes this phone has a worse processor, camera and screen brightness, but when it comes down to it, I can see no difference in speed, i get a bigger battery, faster charger and a 90hz display for next to nothing. Just an FYI, the UK version comes with NFC.

Ray
5.0 out of 5 stars Best mobile I've had
Reviewed in the United Kingdom on 22 July 2020
Colour: Comet WhiteSize: realme 6 64GBVerified Purchase
I've had this for just over a month now. I was using a Samsung S7 Edge, but a broken screen repair was well over £100 alone, the repair shops were closed from Covid, so I took the chance paying the extra for this.

I cannot fault it, and would highly recommend.

It had everything I wanted: NFC, Fingerprint Reader, Good Cameras, large expandable storage, latest versions of Android, very long battery life, decent built in storage etc. The big screen is great for SatNav/Netflix/Gaming, and the performance is not glitchy at all - plus the 90hz refresh rate for a phone in this price range.

Check out independent reviews. And to clarify - the phone does have NFC (a lot of reviews says it doesn't, because it was the Asian release being tested as it was so new, but European models have as standard)
Read more
5 people found this helpful
Report abuse

Ben
5.0 out of 5 stars Really good budget phone
Reviewed in the United Kingdom on 25 June 2020
Colour: Comet WhiteSize: realme 6 64GBVerified Purchase
Bought this for my wife when her Pixel 3a suffered from the major bottom speaker problem. The Realme 6 for the price is brilliant, smooth, better screen than her old pixel and my current iPhone 11 I’m typing on now. I can highly recommend the Realme 6.
Read more
2 people found this helpful
Report abuse

Bertram Wilson
4.0 out of 5 stars After 24 hours
Reviewed in the United Kingdom on 19 October 2020
Colour: Comet WhiteSize: realme 6 64GBVerified Purchase
I've had the phone for a day now, and it's a huge upgrade from my iPhone 6, which, admittedly, I kept hold of for too long. This phone has been really snappy for what I use it for (social media, web browsing etc. ) and Realme UI hasn't disappointed. The screen is great, but for those with smaller hands one-handed use won't be easy. The phone is nice and heavy, which makes it feel more premium, and the included case provides some grip and protection. The vibration motor is quite mushy, however, but that is quite a niche complaint, especially considering how snappy the phone is. The speaker sounds quite tinny as well, so I'd recommend investing in a speaker if you'll be listening to music a lot. It does the job for social media and YouTube though, and it's a worthy trade off, especially since the screen is so smooth. I can't really comment on the camera since I haven't used it much but I would recommend finding a version of Google Camera for this phone because that will take much better photos and videos. I would say this - if you can't find this phone for £180 or less, go with the Realme 7 instead. It's largely the same, but with a bigger battery and a faster processor. It's also 6 months newer than this phone, and is priced at £180. I got this Realme 6 for £179 a few weeks before the 7 came out because my old phone was literally on it's last legs - it started rejecting the only working iPhone charger in the house. The only real difference between this phone and the 7 is that this one has a slightly better camera ON PAPER. It's important to remember that that doesn't always mean better performance in practice. Overall, I would go for the Realme 7 with its classier design, unless this phone is significantly reduced below the RRP.
Read more
Report abuse

Laura B.
5.0 out of 5 stars Lovely phone
Reviewed in the United Kingdom on 14 July 2020
Colour: Comet WhiteSize: realme 6 64GBVerified Purchase
Battery life is great and charges so fast with the fast charger! Lovely camera and functions fast. Nice screen. Phone arrived well packaged and functioning. Case included so don't need to buy an additional one!
Read more
Report abuse
See all reviews
Get FREE delivery with Amazon Prime
Prime members enjoy FREE Delivery and exclusive access to movies, TV shows, music, Kindle e-books, Twitch Prime, and more.
> Get Started
Back to top
Get to Know Us
Make Money with Us
Let Us Help You
And don't forget:
© 1996-2020, Amazon.com, Inc. or its affiliates