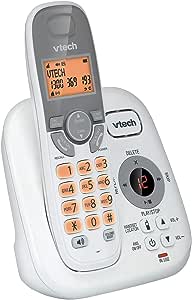 The VTech DECT Cordless Phone has impressive clarity, security, and range through its DECT technology, letting you keep in touch with family and friends alike with minimal fuss. It also has a 70 name and number phonebook to provide quick access to your important contacts. The Vtech DECT Cordless Phone has an orange-backlit display and keypad for easy dialling and contact checking. Thanks to its Power Fail back-up system, this cordless phone's base unit can stay powered via the handset battery, providing you with the option of making and taking calls even during mains power outages/interruptions.The DECT cordless phone has up to 12 hours talk time and 160 hours standby time, making it ideal for busy homes. Made with Calling Number Display Call Block, the Vtech 17250 can block unavaliable and private calls, as well as prevent up to 20 user-specified numbers from calling your line. The Vtech cordless phone has a volume booster function to improve audio. It's also hearing aid compatible for added convenience.

4.4 out of 5 stars
4.4 out of 5
10 global ratings
How are ratings calculated?
To calculate the overall star rating and percentage breakdown by star, we don’t use a simple average. Instead, our system considers things like how recent a review is and if the reviewer bought the item on Amazon. It also analyses reviews to verify trustworthiness.

Caroline M. Alexander
3.0 out of 5 stars a decent phone
Reviewed in Australia on 25 August 2019
Verified Purchase
This phone lost stars for its brochure and set up, as well as having a stiff,, and therefore slow, keypad. Since its generally older people who have landlines, none of those points are minor. Yes, its easier to read the instructions than the manual for a rival well-known brand (the print is larger for a start) but if you are vision impaired, its not easy to set up quickly as the instructions are also badly set out. They need editing so we can get the phone up and running with a minimum of fuss. It took me over 24 hours and a craft magnifying light with a pattern holder to be able to hold the instructions with a magnifying glass where I needed it, and hold the phone at the same time to set the time, the number of rings (the default is 3 when the answering message cuts in!) and anything else you absolutely want to do before its working properly.
That said, there is a beep for every time you press the keypad so you will quickly realise if you miss a number out when dialling, though the keypad itself is stiff because of the plastic coating over the keys, and the screen is easier to read than its popular rival. There is also a choice of ring tones, and its possible to make them much louder. it also has an alarm built in and a 70 number phone book. You do not have to use the default message on the answering machine, though unless you particularly want to advertise who you are to scam callers, I would recommend saving your sanity and not trying to tackle the instruction book again to replace it.
Once set up there seem to be no problems, though the maximum ring time is a bit short, its 8 rings. Its clear to listen to and, calls home to base if you forget where you put it down. You can also adjust the amount of recording tme for messages if you are masochistic, or have a handy 10 year old to do that for you.
Its a standard cordless phone, at a standard price, with a few bells and whistles that you will only be able to access if you like fiddling or have super eyesight. On balance, it has a few advantages over its closest market rival, but it also has its bad points - its going to depend on what you want your phone to do. If all you want is a basic single cordless phone with an answering machine, hat answers calls and lets you phone out, it does its job without the fancy price tag of many others. Its not outstandingly good or bad.

Ron Edwards
5.0 out of 5 stars Cheap phone that works!
Reviewed in Australia on 19 June 2019
Verified Purchase
I have NBN and just needed a new phone that worked for the one call a week I get from telemarketers..... It has an answering machine and call screening ;-) - it also has hands free which I didn't realise, so even better - although I won't use it..... Great buy and perfect for what I needed!
Read more
Helpful
Comment Report abuse

willwhittle
3.0 out of 5 stars it works ok
Reviewed in Australia on 26 July 2020
Verified Purchase
labyrinthine menu and low call volume (even when 'volume booster' is on). But signal is ok all around my flat, it has a VM and, if you can work out the instructions, you can turn the ringer off. It was economical and works ok. (Y)
Read more
Helpful
Comment Report abuse

Matt Forder
4.0 out of 5 stars A good home phone if you need one
Reviewed in Australia on 7 May 2019
Verified Purchase
I needed a new home phone to go with my new NBN connection, and this one has done the job nicely. Recommended if you’re looking a basic home phone.
Read more
Helpful
Comment Report abuse

Judith M. Masters
5.0 out of 5 stars Simple to use
Reviewed in Australia on 1 March 2020
Verified Purchase
Simple to use and good voice sound.
Read more
Helpful
Comment Report abuse

Christopher Summers
5.0 out of 5 stars Liking the phone.
Reviewed in Australia on 21 July 2020
Verified Purchase
I like the color of the phone and the back light
Read more
Helpful
Comment Report abuse

Mohit Garg
5.0 out of 5 stars good phone
Reviewed in Australia on 1 March 2020
Verified Purchase
item as described. reached on time
Read more
Helpful
Comment Report abuse
See all reviews
Pages with related products. See and discover other items: Best Rated in Telephones, VOIP & Accessories
Get FREE delivery with Amazon Prime
Prime members enjoy FREE Delivery and exclusive access to movies, TV shows, music, Kindle e-books, Twitch Prime, and more.
> Get Started
Back to top
Get to Know Us
Make Money with Us
Let Us Help You
And don't forget:
© 1996-2020, Amazon.com, Inc. or its affiliates